CPGI: Inside the Experience of Sectionals

“You can watch sports on your TV all the time. I mean, how many times are you going to go and see shows in your lifetime? In high school, you are getting the chance to see them” Foelker shared. 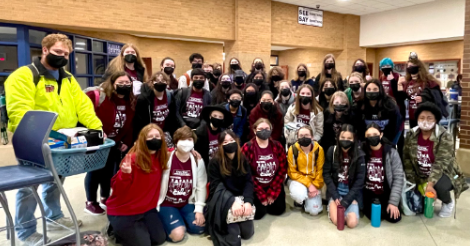 The whole company of CPGI inside Lake Park getting ready for the awards.

On March 19 at Lake Park High School in Roselle, Central’s theater company ENCORE! was finally able to participate and share their hard work in this year’s IHSA CPGI Sectionals after two years of postponement due to COVID.

CPGI stands for “contest play and group interpretation,” two different stage performances featured at Sectionals. According to Lexi Foelker, one of the costume crew heads for this year’s CPGI, “CP is a traditional play with lights, sounds, set, and costume changes. In GI the actors make their own sounds, in the same costumes throughout the performance, and their set was only boxes.”

While working behind the scenes of this year’s CPGI performances, Foelker was thrilled that ENCORE! was able to go to Sectionals this year since ENCORE! was unable to perform at Sectionals due to COVID during Foelker’s freshman year.

“Being able to go and do it this year was closure for me. I know a lot of people, it was new for them. It was definitely an experience,” Foelker said.

The lead chorus actress in “Antigone Now” junior Milla Kutsin was also one of the many freshmen who were unable to perform their very first competitive performance back in 2019.

“While it was very upsetting at the time, it felt so good to be back on stage and getting to share our hard work with an audience this year,” Kutsin explained.

Although having two very different jobs during the performances, both Foelker and Kutsin worked extremely hard at Sectionals this year even during the stressful times.

Foelker shares that the most stressful time at Sectionals for them was the time limit of unpacking the truck and getting the equipment inside the school.

“Some things were falling off the dollies and that caused freakouts. We thought we were going to be over the time, but we made it within the time and set up in under 10 minutes.” Foelker shares, “You saw everybody jumping in trying to get the equipment unpacked and set up. Some people were really stressed and you saw others comforting them.”

Kutsin, on the other hand, explained how she had to make sure that all of her lines had to have meaning while she was performing.

“I felt as if everything had to be perfect. I was really nervous about messing up. I didn’t want to ruin our chances at sectionals,” she explained.

Even with the stress at sectionals Kutsin dived deep into what going to the competition was really about.

“It helped me realize that all the people performing are students just like me and the competition aspect isn’t the most important thing. It’s being able to connect with other people who share the same interests as you,” Kutsin said.

Foelker, overall thought the company did a great job working together during and before Sectionals. They explained how there would be nothing on the stage at the beginning of the three months and at the end of the third month, there was “this beautiful show for everyone to come and see.”

After the heat of sectionals, both Foelker and Kutsin want to get more Grayslake community members to come to their shows and see the effort the program has put into them.

“You can watch sports on your TV all the time. I mean, how many times are you going to go and see shows in your lifetime? In high school, you are getting the chance to see them” Foelker shares.

“We devoted countless hours to creating a show and it deserves to have an audience.” Kutsin explains, “Even though we didn’t advance to state, both shows were super close! Both 1 place away from advancing. Next year we will come back, ready to advance to state!”