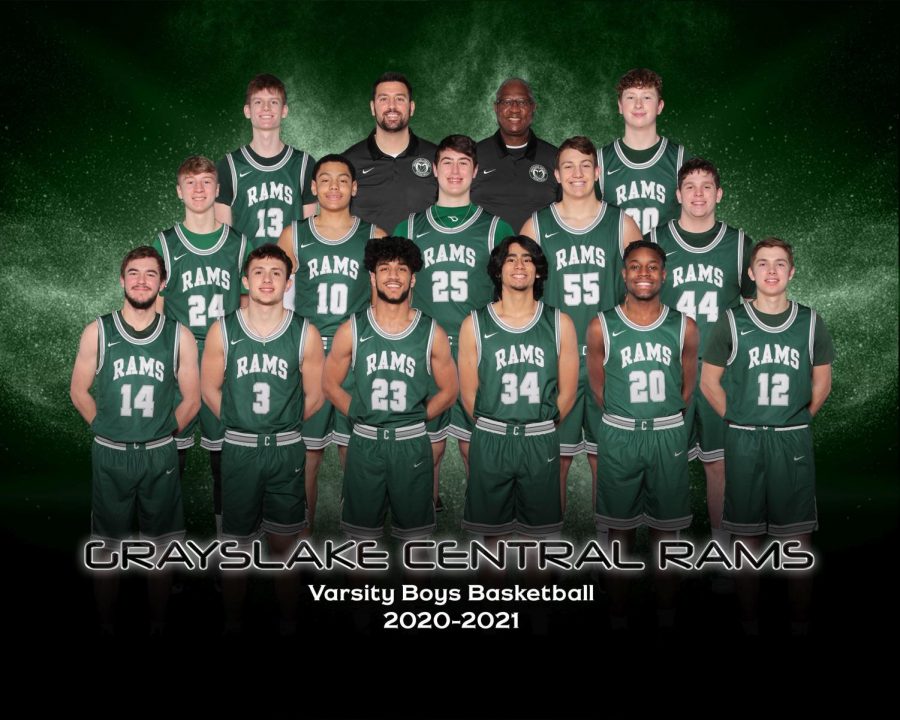 The Rams varsity boys basketball team’s official line-up for winter sports basketball season 2020-2021. Basketball coach Brian Centella acknowledged his team for finishing off the season strong. “The guys really hung together through adversity. We continue to get better throughout the year. We had great senior leadership...I'm really proud of the way the guys hung together and finished,” said Centella.

The Grayslake Rams finish-off their season with a final standing of 4-4 record after winning against Antioch with a score of 49-37 at Antioch Community High School on Mar. 12. varsity boys basketball coach Brian Centella shows his deepest gratitude to the success of the team despite being held back from games for two weeks.

The boys team missed their games from Feb. 16 until Feb. 27 due to a reported COVID-19 case. This forced the team to undergo quarantine within the time frame of two weeks from the day the case was reported. Click the LINK to see the previous update about the temporary pause in the basketball team’s season.

Varsity boys guard Jackson Bullman explained the big difference of this year’s season compared to last year. “The season was a little bit of a struggle given the circumstances. Nobody knew if basketball was going to happen because practices and contact days kept changing constantly… I was very appreciative that we were able to have a season, but it definitely had its challenges,” said Bullman.

Despite the temporary suspension of games, the boys stay focused on their primary goal whenever they start playing for their season. “Our goals remain the same. To try to get better every single day in practice, to try to play our best and compete on game days, and to continue to grow and develop as a team,” said Centella.

The boys utilized their time during their quarantine days by staying in shape, getting better, and by practicing channeling and clicking as a team as they can before heading back again to finish their final set of games. Centella shared the most challenging hurdle that they have encountered. “Finishing the season with four straight road games in that short amount of time… was really tough,” said Centella.

Bullman suggested that the removal of games mid-season was challenging. “The most problematic thing I’ve encountered this season was probably just the length of the season. It [took] me a little while to settle into the season and practice before I started playing at my best. By the time I was starting to play at my best, the season was wrapping up. If we had a full season, the outcome would’ve been better,” said Bullman.

In order to overcome their challenges, Centella challenges himself to do his best to maintain the team’s spirit high and to keep the same mentality they’ve been working on since the very start. “To keep the guys motivated, one of the things that we talk about when you go and you play on the [court], is that it’s kind of fun. It’s an opportunity to go somewhere where we kind of feel ‘we have to stick together,’ We can only rely on each other–that underdog mindset and accept and take on the challenge,” said Centella.

After the season ends, the young gentlemen and Centella “use a little bit of break from basketball” in order to make way for those players that have different sports in the next upcoming season. “Giving [the players] time to be able to compete” in other sports was prioritized for multi-season athletes to have time on their own to rest and prepare for their next set of games.

Centella clarified that after the next seasonal sports end, they prepare for upcoming summer league games. “Summer is a really big deal for us for basketball. We have a camp. We usually have summer league games-shootout tournaments. And then we’ll start talking about a little off-season work and [find]  ways to get stronger and to keep getting better,” said Centella.

Collectively, Centella extended his gratitude to his whole basketball team from the freshmen team to the senior’s team.  “I [am] very proud of our lower-level teams. Our freshmen A and B teams had a great season, our sophomores had a tremendous season. To see younger guys in the program work so hard and stay so committed, even during the challenging season… as the head coach, it really made me proud,” said Centella.

Likewise, Bullman acknowledged his coaches with their endless support. “Coach Centella and Coach [Darrick] Ellis were both very effective in times of struggle with both things related to COVID and just normal basketball struggles. Coach Centella was always staying in contact with all the guys about how we’re doing and trying to build team chemistry even when we couldn’t play,” said Bullman.

“Basketball is a team game. Five guys that are on the court playing for each other and sharing the ball and being connected on defense and communicating. That’s what makes it special–that’s what ultimately will [create] champion teams that can really play together,” — Brian Centella.