With winter sports on hold per IHSA, plans are still underway for when they resume. 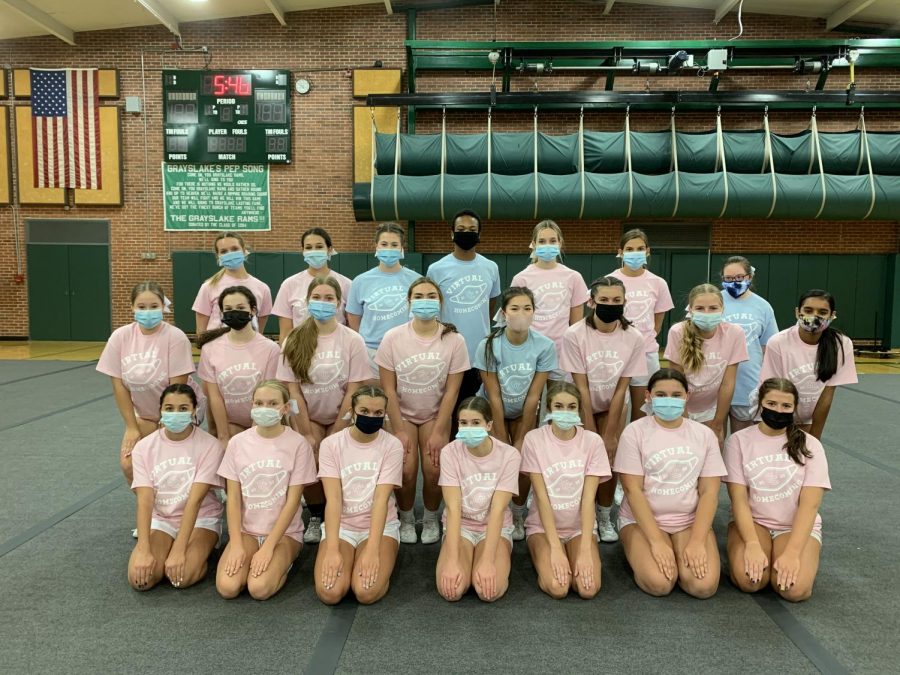 Cheer took the practice time they got during the fall and made the best of it and worked within the guidelines! Photo provided by

With the recent pause put on all winter sports as of Nov. 17, 2020, by the IHSA, plans are still going to be put in place for when sports come back. Currently, there is no date for the re-starting of the winter sports season. Cheerleading could be virtual, basketball, dance, swimming, and gymnastics will happen and some sports we usually see during the winter are moved to summer.

Cheerleading and all of the high flying action from the state contenders could look different this year. With talk of the many different ways that cheer competitions can happen this year, one of those ways is a virtual competition.

Head varsity cheerleading coach, Kelsey Adams said, “Just knowing the COVID restrictions, it is likely that we will do virtual competitions.”

This is a big change from what the cheerleaders are used to. Stunting will not be able to happen as it has in years past, as it violates COVID guidelines. With all of these changes to the sports, the athletes have handled it well and not let it affect their practices.

Coach Adams said, “I’m sure they’ve been composed towards me. I am certain that they have a lot of frustrations.”

With a lot of the guidelines, cheerleading has been affected in ways that change the sport down to the core, and the athletes are along for the ride. That doesn’t mean that the athletes have not been putting in work and holding each other accountable. Seniors Marcus Mittelstadt, Caitlyn Mikes, and Brook Mueller have to lead the charge.

“They do a really great job of sort of like rallying the troops, getting everybody back on track, and understanding like what the end goal is here,” said Adams.  “Truly everyone in the program has done a great job in some sort of leadership aspect.” With cheer looking to make a competitive run once seasons restart, Coach Adams and the team are preparing for everything.

Like cheer, GCHS also has other sports going on during the winter season, but their fate is still undetermined.

Basketball has been in the headlines lately as there has been quite a controversy surrounding whether or not to play. Governor Pritzker stated that he doesn’t want basketball to play as he has classified it as a high-risk sport just weeks before the season was supposed to kick off. The IHSA, on the other hand, has said that basketball will happen, which has caused some confusion as to what is actually occurring. Before the pause, basketball games were planned to start on Nov. 30.

With the possibility of a student-athlete getting COVID, there are protocols in place that are followed very strictly to ensure that students are as safe as they can be.  Moe stated, “We work with [the student] to figure out what’s going to go on in those practices and we move on from there”.

During the fall, fortunately, there weren’t many incidents for our sports programs. Moe mentioned, “The fall was really great. Our student-athletes were super open and honest [about their symptoms].”

COVID has had major effects on sports this year; wrestling, a sport that typically happens in the winter, has been moved to summer, which poses a plethora of issues for athletes and administrators alike.

Senior wrestler Joey Jens has been put into a situation not many have been in before, where his season is put at risk. Jens said, “I kind of have mixed feelings about competing right now, but I’m hoping soon everything will get back to normal.”

The path for a senior has not been clear this year with some student-athletes that were planning to use their senior season to help finalize what college they are going to attend.

With really no way of knowing what the next day, week, or month has in store for us, Moe ensured that we will play as long as “we can [keep] everybody safe and healthy.”