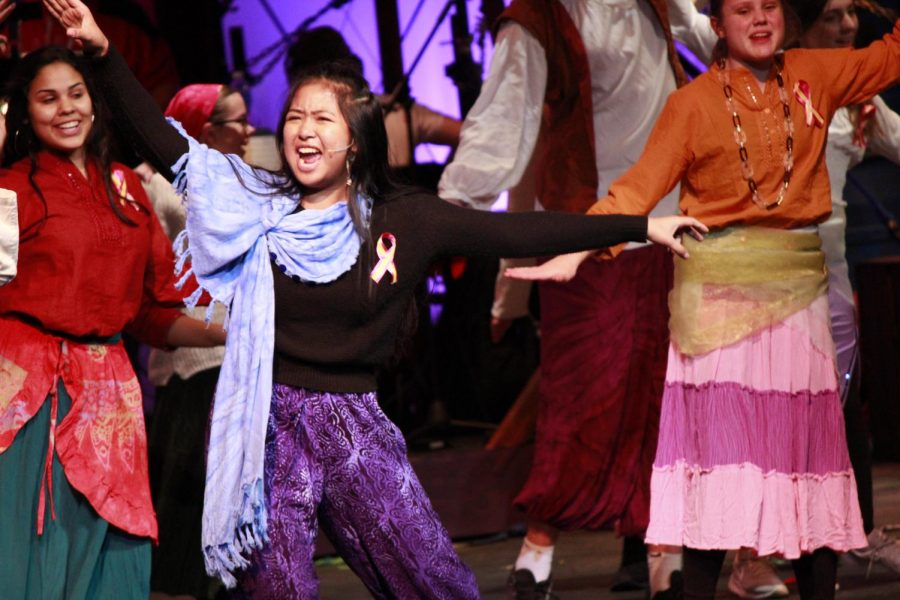 Senior Jennica Sajor sings on the stage of Godspell.

As the lights in the theater start to dim down and the curtains began to rise, months of preparation and hard work were showcased on the stages of Godspell.

A cast of thirty-six students and a total of over one hundred students were working on this show. From the improvisation of the actors to the technical skills of the crew, different talents and skills were involved in the success of Godspell.

“It was a very technical show, with the fabrics and… the projectors. There were some points where it was like ‘are we really going to make this happen?’ but pretty much everything came together,” director of Godspell, Patrick Kerr mentioned.

They also used projectors for special effects. They projected scenes from the original Broadway production and the Godspell logo on to the stage.

“For this show, we used projections for the first time. They looked amazing. It was something we’ve never done before,” said Props crew head, Emma Romanelli.

Along the technical challenges of the show, there were components of the production that needed to be delivered in a certain manner.

“Stephen Schwartz makes constant references to the fact this this is not such a religious play, although it is religious. It’s more about community, building community, and seeing that people can come together in spite of differences,” Kerr mentioned.

It was important for the actors to understand this idea of a play about religion and focus in on the true message behind it in order for the audience to comprehend.

Most of the scenes were direct stories from the Bible such as “The Prodigal Son” and “The Parable of the Seed”. Another challenge the actors needed to conquer was to somehow link each individual story and make sure it flowed smoothly from one scene to the next.

“To make it cohesive… the show itself was kind of like a collection of short stories in a way. So I was trying to think of the best ways to connect them as an actor,” Daniel Karl, the actor who played Jesus, mentioned.

One other unique thing about this production was how much improvisation the actors had to develop. Due to the nature of the show, the actors were able to be creative and deeply explore their characters.

“My favorite scene is the whole prodigal son scene. Because the students came with all of those improvisations… we just chunked out where they were going to be but they developed that all on their own,” Kerr mentioned.

Along with the obstacles that were overcome, there were several rewarding moments as well, such as meeting new people, bonding with old friends, and improving individual skills.

“I like that I got to hangout with all my friends. It was a really fun semester,” Karl mentioned.

The main purpose of the production was to show the possibility of building a community with a diverse group of people. This is not only shown on stage but also behind the scenes.

“What I enjoyed most this year is how close the crew and company got, especially with all the long days that we had,” Romanelli mentioned.