After a long run of conference, regionals, and sectionals, cheer made it to state for the 10th year and did not disappoint. 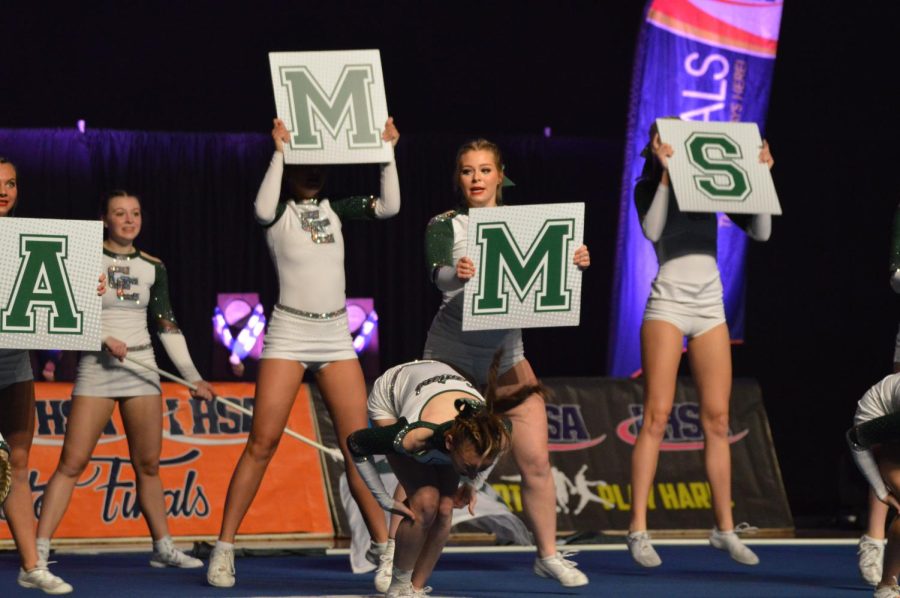 The GCHS Varsity Cheer Team performs at the state competition in Bloomington, IL.

The GCHS cheerleading program is very competitive and they take their job seriously. The girls dedicate their time practicing their routine to make it perfect. The GCHS cheerleading teams never fails to make the Ramily proud. The girls have made it downstate every year for the last four years. The team had very high expectations for themselves this
year, and ended up placing 6th at state.

Junior Tatum Schuerman said, “I thought we were going to go pretty far, I feel like we trained ourselves for success and my expectation was just to hit our routine at state and we did that.” While the outlook on the season was mostly positive, there was some doubt that the team would master new techniques by the end of the season. “This was the first year getting back to stunting… I’m glad where we ended up and we did our last performance the best we could,” said senior Lexi Andersen. In order to succeed, the cheerleaders had to continue to make improvements throughout their season. Many cheerleaders saw improvements over the course of the season.

“Overall, I think I’ve just become a better back spot and a better leader on the team this season,” said Andersen.
Some seniors on the squad plan to continue cheerleading in college. Andersen and Schuerman are planning on cheerleading at Purdue University. For some, winning the sectional championship was the highlight of their season.

Senior Hailey Droessler said “[it felt] amazing because we had one of our best routines so it felt like our peak. For girls new to the team, going to state was a new and exciting experience. Droessler said, “It was really exciting. It was
my first time going to state with the team, so the energy, and the warm-up room, and everything was really fun and the whole environment there was amazing.” “Honestly, I was a lot less nervous than I thought I would be just because I put in the extra work and I was trained, I also knew that I did everything I could get to that point,” said Schuerman.

When the scores were announced the girls were underwhelmed with their performance. Andersen said, “I was
feeling a little defeated with the scores because I knew we should have gotten better scores.” Despite having higher
aspirations for the team, the girls were very proud of themselves for making it as far as they did. Each and every one of their accomplishments would have not been possible without the team’s amazing coaching.

The cheerleaders are very grateful for their head coach Kelsey Adams. “The Grayslake Central Cheer program differs from other schools because we have an amazing coach that unifies us and teaches our [senior] leaders how to be leaders. I feel like other schools have to just pave their way, but our coach really makes a path for the leaders to unify the team. She gives us all of the personal support [you] need. She knows what kind of athlete you are and shows how to be adaptable. It makes our whole team closer.”

Overall, the GCHS cheer program taught our students to always have faith and try their hardest. The cheer program has been a beacon of athletic success in our school community over the past four years, and continues to show us that it takes respect, leadership, and dedication to be successful.