Ukraine and Russia: The State of the War

The current state of the war between Russia and Ukraine. 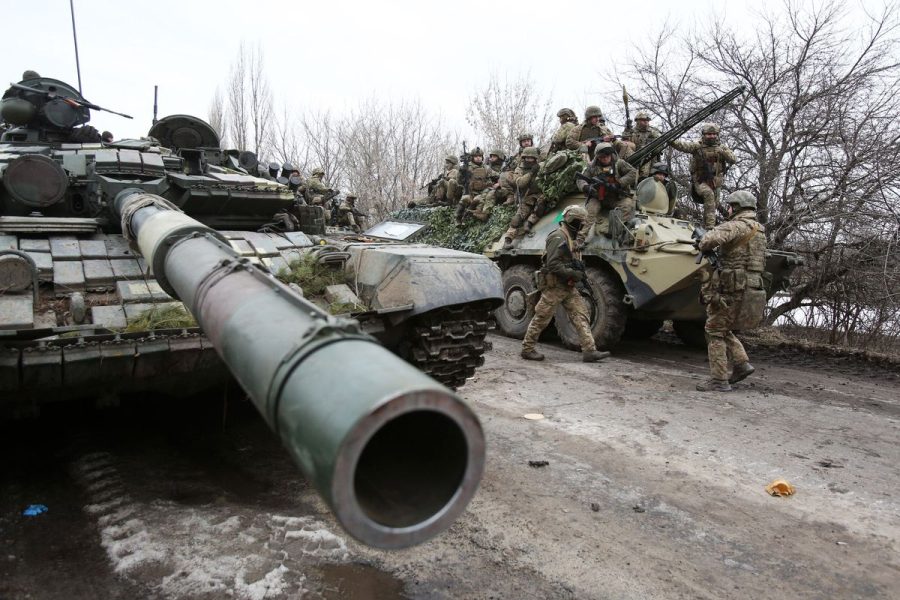 Ukrainian soldiers getting ready for an attack in Ukraine

On February 24 2022, Russia invaded Ukraine with roughly 190,000 troops amassed on the Ukrainian border. As one can imagine, this has affected the North American Treaty Organization, or NATO, in its ability to respond to the situation. The 2022 invasion was likely caused by  Ukraine’s push to join NATO. Ukraine was pushing to join NATO as the result of escalating Russian tensions in that region since 2014.  Another cause could be linked to Russian president Vladimir Putin stating that Ukraine belonged to Russia, and that it’s justifiable to invade and take back rightful Russian territory, considering the countries used to fall under the same government prior to the fall of the USSR.  Another potential cause for the invasion could be that invading Ukraine could serve as a pretext for invading other NATO member countries.

Currently Russia has invaded four different regions in Ukraine. One push is driving deep into Ukraine from Crimea in the south, one is pushing in from the Donbas region (which has been in conflict since 2014), another from the Northeast and the last one driving straight into the heart of Ukraine and with the mission of taking the capital of Kiev.  Over the past five days, the Russians have made little progress into the country. Only capturing a few major cities and important roads.  As of the week of February 28th, they haven’t made it directly into the capital city of Kiev. There is no telling how it will go in the next coming days, but it seems like right now Ukraine is holding on and pushing back against the Russians.

In a press conference Russian president Vladimir Putin said, “I decided to conduct a special military operation. It’s goal is the protection of people who during eight years suffer from abuse and genocide from the Kyiv regime. Whoever would try to stop us and further create threats to our country, to our people should know that Russia’s response will be immediate and lead you to such consequences that you have never faced in your history…we are ready for any outcome.”

As Social Studies department chair Jason Janczak put it, “Putin went in, and said Crimea [a disputed region of Ukraine] wanted to become Russians and [that] Ukrainians were not treating them well.” Back in 2014, Russia invaded the Crimean peninsula with the justification that Ukraine was neglecting their citizens and that they wanted to join Russia as the result of abuse in the region. Obviously, the validity of this claim is up for debate, but 2022 hasn’t been the first time Ukraine and Russia have been in an active conflict with each other.

“Countries invading other countries have been commonplace in world history, and the one that many people will point to is Hitler in the 1930s,” social studies teacher Jim Plaza explains. “ [Hitler believed] that Germany had the right to occupy surrounding countries to return them to the ‘greater’ Germany.” It’s easy to compare Putin’s invasion to Hitler and his actions during WWII. We have watched situations like this happen in recent history. It also raises the question on if Russia will stop after Ukraine.

“US troop movement in Germany and froze Russian assets along with Europe doing the same as the US. Gas pipeline that runs from Russia to Germany is being halted and that is a big cash cow for Russia,” according to Jason Janczak. The US and other countries have put sanctions to put pressure on Russia and punish them for invading Ukraine.  “The US has already sent troops to Poland to back the NATO forces if something were to happen, and they have imposed economic sanctions on Russia. US troops have been stationed in Europe as peacekeeping forces for decades.”  according to James Plaza.

This is an evolving story and Rampage will continue to report on and monitor the conflict in Ukraine.