Why you should work at a camp this summer

Something that many people haven’t thought about though, is what it would be like to return to said day camp of choice and work there as a counselor. 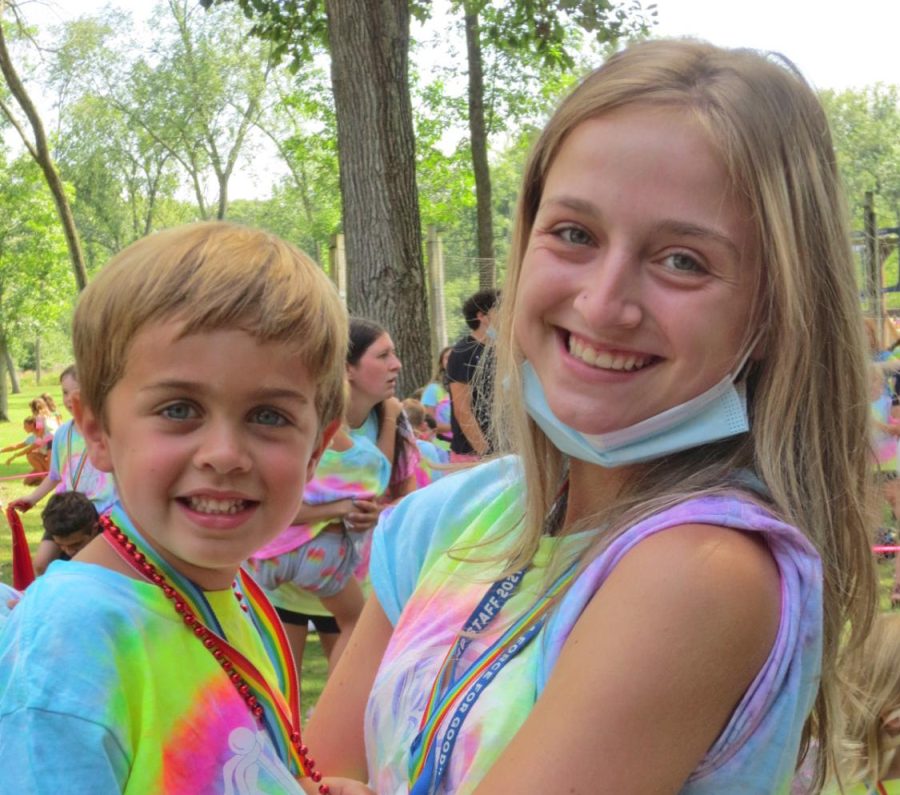 Banner Day Camp group counselor Olivia Herman poses with one of her campers.

For most people, going to a summer camp is one of those quintessential things that we all remember from our childhoods. Whether we “outgrew” it after third grade, or became a veteran of our second home through high school, many of us have fond memories of spending time outside engaged in a variety of activities, and making tons of friends along the way. Personally, summer camps are a mainstay in the Laubhan household. As a 9-year veteran of Banner Day Camp in Lake Forest, it’s one of those things you look forward to throughout the school year, and when the school year comes to a close all you can do is amp yourself up for the summer ahead.

Something that many people haven’t thought about though, is what it would be like to return to said day camp of choice and work there as a counselor. The reality is that it is a tremendous learning experience for everyone involved, teaching you valuable real-life lessons in leadership, responsibility, empathy, and caring for someone else, and it gives you a sense of pride in seeing to it that the eight-to-ten kids in your group have the best summer possible.

Highland Park junior Makalah Waldrop, who worked at Banner as a lifeguard, explained that her desire to work at Banner was driven by her love for working with kids. “What drew me to Banner as my summer job is I love to work with kids. I also like the environment of being outside and the staff is amazing,” Waldrop explained. “Work hard and take your job seriously, while at the same time meet… new people. I think [the job] is a balance of being good at your job and making it a fun place to work.  Also, be yourself, there are so many wonderful people who work at Banner.” As a lifeguard, Waldrop’s responsibilities included overseeing the safety of campers while in Banner pools, teaching swimming lessons to a wide range of ages, and overall seeing to it that campers were having the best summer they could possibly have. She plans to return in summer 2022 and enthusiastically encourages others to as well. “I would definitely recommend this job. It not only teaches you responsibility, [but] it is fun and the staff is amazing!”

Olivia Herman, who worked as a group counselor, oversaw a group of pre-k boys this past summer. “I have worked at a summer camp before Banner and enjoy working with kids so I thought it would be a good summer job,” Herman said. “I would say the most rewarding thing was seeing some of my campers that were more trouble learning how to manage their emotions and feelings better. Being able to see the change in kids so young is impressive and makes me feel proud of them.” Herman’s responsibilities included overseeing the safety of campers, coming up with fun games for the campers, being a role model for them, helping them with any difficulties they may have been going through, and being able to build trust and reliance with the camper’s parents.

“If you want to work at Banner or any summer camp, I’d say do it because it builds exceptional leadership experience and builds patience and open-mindedness,” explains Lake Forest High School senior Luisa Hance, who just finished her 12th summer at Banner as a junior counselor. “It felt like a second home and I always knew that I wanted to work there when I got older,” Hance continued. Hance was a junior counselor this past summer, and her responsibilities included doing much of what a counselor did, along with being able to work collaboratively with her counselor on making sure her group of Kindergarten girls was having the best summer possible. “The most rewarding part of last summer was when my leadership [a supervisor who oversees a “pod” of four groups in the same age level] would tell me how during her… calls [home] the kids would tell their parents all about me and would even ask for my number to babysit. At this moment, I felt like I really made an impact in these kids’ lives.”

If you are interested in applying for a summer position, apply online at bannerdaycamp.com!