Could girls lacrosse be coming to GCHS?

Lacrosse is currently the fastest growing girls sport in America. Could it come to GCHS? 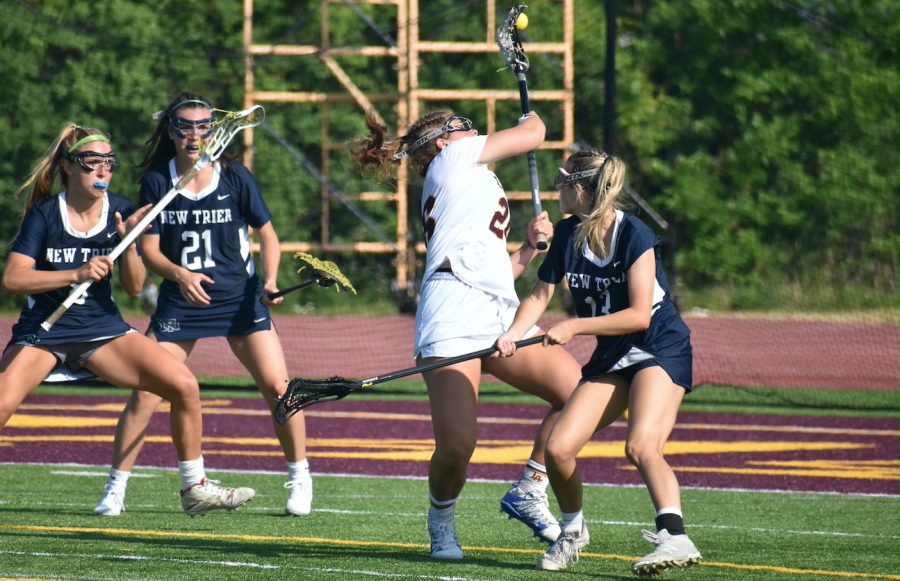 Ellie Lazzaretto of Loyola Academy evades New Trier's Ella Huber, Audrey Rudolph, and Brooke Ross for a 7-1 win. Loyola, just 30 minutes from Grayslake, has the fourth-best girls lacrosse team in the nation and the #1 team in the state, going 25-0 their last season, according to MaxPreps. With Loyola, Lake Forest and Stevenson, all top 20 teams in the state, right in our backyard, GCHS has a good starting place if a girls lacrosse team were to be formed.

Lacrosse is currently the fastest growing girls sport in America. With popularity surging in the late 1990s, the boys’ version of the game has since become a mainstay in most high schools. It’s fast-paced, requires agility and quick decision-making to play. It’s exciting to watch, and has similarities to many other field sports, making it easy to adapt to.

Girls and boys lacrosse differ drastically from each other. While sports like soccer, volleyball, and basketball only have some minor changes such as a smaller ball or a lower net height, girls lacrosse is played with different positions, equipment, rules, and field markings. It’s practically a different sport with the same objective: score more goals than your opponent.

GCHS sophomore attacker and midfielder Leah Taylor has been playing lacrosse since 8th grade and strongly supports starting a school team. “I think it’s important because [the girls from Grayslake Central] are the only girls on our [club] team that don’t have a school team,” Taylor mentioned. “My club doesn’t do a spring season because it interferes too much with the high school season, so since we don’t have a high school season I don’t get that lacrosse practice in that I need, and that everybody else on my team gets.”

Central’s athletic director Brian Moe went over the general process for starting a new athletic team in the district, and what gathering student interest looks like. “The first thing we do — per the board procedures we follow to start a new team — is we start with an interest survey that we do every three years.” Moe went on to mention that “We take that information, and then Ms. Woolard [the athletic director at Grayslake North] and myself talk to the administration here, and at North, and then with district administration on what the interest looks like, and then Ms. Woolard and/or myself would make a recommendation to the Board [of Education] to add a new sport, and then the board has to give final approval… so up to this point, we haven’t seen in those surveys the interest to take that forward to the board.”

One noticeable change to Central’s athletic program this year as a result of these interest surveys was that girls golf, which has been a co-op between North and Central for several years now, separated into two teams at Central and North. Since the split, interest in the sport has since grown significantly. Prior to the split, the 2020-2021 co-op team consisted of 11 players, however the separate teams in 2021-2022 had 16 players at North, and 21 at Central.

“I’ve talked to a lot of people and even if they haven’t even played before, they’re like, ‘I’ll do it,’” Taylor elaborated.

Considering this, we could expect a growth in interest if girls lacrosse teams are introduced into the district. While many people who have been playing for a long time will try out, many people interested in the sport’s newfound presence will likely try out as well, hoping to have a different spring sports season than usual.

As Moe put it, “Our mission at Grayslake Central, and Grayslake 127, is to have kids pursue their passions, so it’s not that we just don’t want to do it, you know, we just want to make sure it’s a viable program that once we start it, we can maintain it.”