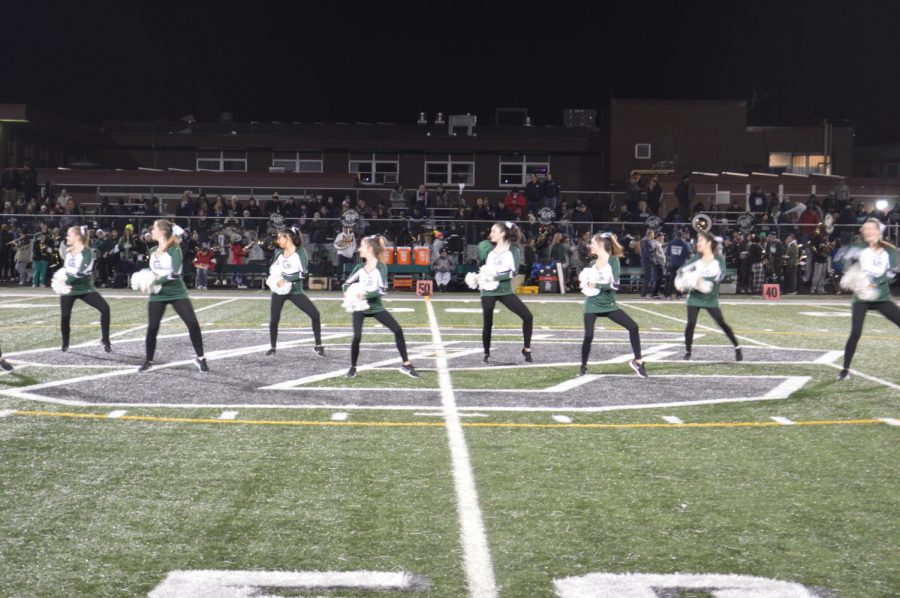 The dance team performs for the IHSA playoff game against Cary Grove.

The fall dance season, beginning in the summer and ending in November, has been a successful time for the varsity dance  team to grow and bond after the previous year’s lack of connection due to the pandemic. This year’s coach, Kristen Matheson, worked with the team over the summer to prepare them for the season ahead.

“Over the summer, we participated in UDA dance camp at Grayslake North High School.  It was so much fun to see the girls work together as a team!  Camp was the first time I was able to see what a fun-loving, silly, yet hard-working group of girls we had,” Matheson said.

As this year’s football season seemed to get back to normal, the senior leaders saw a visible change between last and this year. This excitement culminated in this year’s Homecoming performance.

“I’d say the main highlight [this season] would be Homecoming, just because that’s everyone- JV, varsity, everyone all together, performing again, which has not happened in a while,” senior captain Grace Verciglio said.

Ending on Homecoming’s high note, the dance team is moving out of football season and into winter competitions. Competitions will be back in person, a change from last year where the team had to record their dances and send them in.

“I am really excited to go to competitions and perform and be able to be around other dances from other schools,” senior captain Maddie Johns said. The team is preparing for competitions with the help of senior leadership and programs set by Coach Matheson.

“With competition approaching soon, the team has participated in different forms of conditioning such as barre, HIIT, running, weights, etc.  This will help the team to be physically ready for the demands of a competition routine,” Matheson said.

The team is performing during the winter season at both home and away competitions. Support from the student body when going to competition is highly valued, especially after last year.

“We normally have a home competition so be on the lookout for when that date is. That’s really fun- we typically have a pretty big number of different schools that come, so just come to support the dance team because we love it when people come to our competitions to show support,” Verciglio said.