The new block schedule allows for more time for students to work independently, and gives them a taste of post-high school responsibility 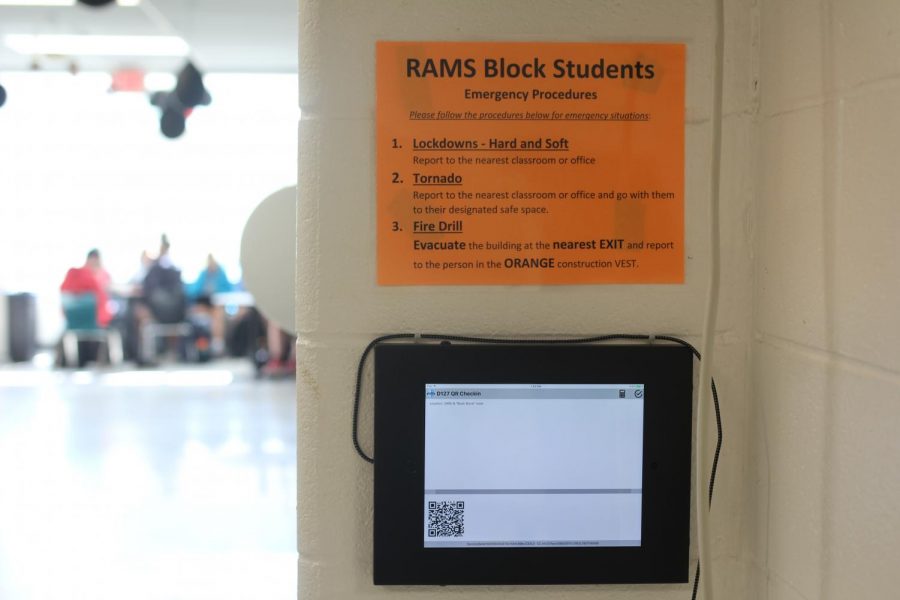 In order to maintain safety throughout the school, iPads are used so that students can log attendance during their Rams Block and indicate their location in the event of an emergency,

If you were to walk through the hallways of our school during a class period in 2019, they would mostly be empty as we would be too busy doing whatever it is we’re doing in class. Of course, in 2021, if you were to walk through the halls, you would probably see a large group of about 4 to 5 people walk past you, or a bunch of kids sitting around a table doing work, or maybe someone getting help from a teacher on some homework. This newfound freedom is thanks to the new block schedule implemented this year, one that was years in the making, that ultimately proved to be successful for the students here at our school.

How exactly does this newfound freedom have anything to do with a block schedule though?

The answer is because students now have a lunch built into their third and seventh period, they have an extra period that’s either occupied by a third elective class, or by a Rams block, a time for students to work on homework, attend presentations, leave campus, or socialize with friends.

“I think it’s cool that you get more time to practice [skills in class], I think… having more time and being [able] to actually get your work done and not rush through 45 minute [periods] is really nice,” explains freshman Sarah Bianchi. “I really like the Rams Block at the end of the day because I feel like it really allows me to conclude all of the different tasks that I had to do during the day,” Bianchi elaborated.

According to sophomore Tyler Steinbeck, a major benefit of the block schedule was less stress around homework. “[The] homework is more spread out, it’s not due every day, it’s due every other day, another thing [is that] having all eight classes can be a bit overwhelming with work you have to do,” Steinbeck explained.

If you’ve followed our coverage of the block schedule, you know that it’s been in the works for a very long time, specifically since early 2019, when the district formed a scheduling committee made up of faculty, students, and administrators from both Central and North to evaluate the then-current 8-period schedule and what its implications were for the students.

“We investigated a variety of models, we actually took about 15 different block schedules from schools all around, not just in the immediate vicinity [of Grayslake], and evaluated them against a rubric that we had developed of things that were important to us in crafting a new schedule,” explains D127 Associate Superintendent for Teaching, Learning, and Innovation Dr. Tracey Landry. “One of the [schedules] initially that we went and [investigated] was the old Maine [School District] schedule… three days a week you had 8 periods, and two days a week you had four,” Landry elaborated.

While this schedule was initially promising, it proved to be a large logistical challenge for a school like Central, especially around lunchtimes and the scheduling of shifts for cafeteria staff. In the end, the current A/B day schedule was the best fit, as best seen at Glenbrook North and South.

“We want to see students engaged in more deep, hands-on project-based kinds of learning… we went on a visit to [GBN and GBS], spent the entire day there, met with kids, met with teachers, went through their entire bell schedule, had a really great experience, and came back feeling really positive about the Glenbrook bell schedule, which is essentially what [we’re using],” Dr. Landry explained.