Grayslake’s future looking bright as ever

From a new set of townhouse developments on the south side of Grayslake, to a massive light industrial, shopping mall, and residential development by The Alter Group, the future of Grayslake is looking bright as ever, and one day we’ll see it all come together. 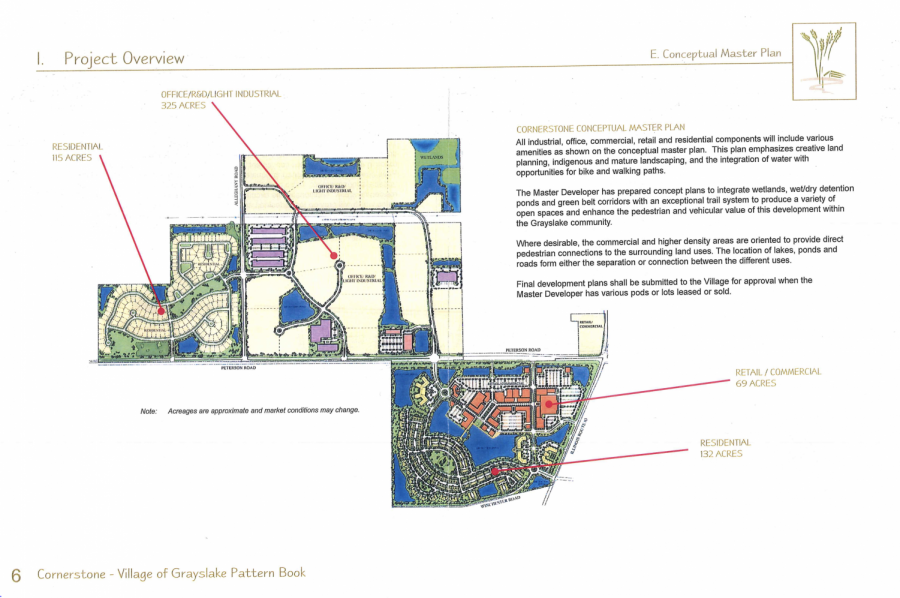 A 2009 rendering of the Cornerstone site as shown in a resource packet submitted to the Village of Grayslake. The plan has been in development for 12 years and is now finally starting to show signs of moving forward.

Imagine you lived in Chicago back in the mid-to-late 50s and decided to take the brand new Interstate Highway 94 up to Grayslake to visit some family. What you would come across is a small, rural farm town with a brand new high school that just finished construction, one so small classes had to be held in neighboring houses and downtown businesses. Fast forward 70 years and Grayslake remains an interesting fusion of small-town charm, with its historic houses in downtown, and classic American suburbia, with its many planned communities like College Trail, Prairie Crossing, and Cherry Creek. It’s not as densely populated as Highland Park or Gurnee, but it’s not as small and rural as, say, Woodstock or Antioch. Grayslake, especially in its downtown, has managed to preserve a small town in the middle of the third-largest metropolitan area in the country.

This begs the question, however, as that metropolitan area expands, what does the future of Grayslake look like?

We can’t talk about the future of Grayslake without first looking to the past. In the late 1970s, a major 2,000-home development plan was announced for a 675-acre plot of land between what is now US-45, IL-137, and IL-120. Facing strong opposition from Grayslake residents, conservationist Gaylord Donnelly, the then-CEO of R.R. Donnelley, a Fortune 500 communications company, enlisted the help of George and Victoria Ranney, distant relatives of his, to fight the development in state and federal courts for 14 years. Eventually, they reached the Heartland Settlement, which allowed the Donnelley’s and the Ranney’s to begin developing the 675 acres of land. Eventually, most of the land was converted into wetlands and native prairie reserves, with 359 homes being developed into what is now known as Prairie Crossing.

While this may not seem very important on its own, Prairie Crossing drastically changed the landscape of Grayslake. It led the village to institute environmental regulations on businesses and residences in the town and led the town to develop a 21-mile bike trail system. It also influenced the development of future neighborhoods in Grayslake as well as the town’s general aesthetic. Now, looking into the future, Grayslake will see some major developments take place in the next 10 years. From a new set of townhouse developments on the south side of Grayslake, to a massive light industrial, shopping mall, and residential development by The Alter Group, the future of Grayslake is looking bright as ever, and one day we’ll see it all come together.

The future of the town starts off with short-term projects that residents can see take shape relatively soon. The first noteworthy change will be the introduction of a first in the Chicago region: a town-wide bike-sharing program. The village recently partnered with Koloni Inc. to bring a system similar to Divvy bikes in the city to Grayslake so that visitors to the town can take advantage of the town’s previously mentioned network of bike paths. The way the program will work is that several locations throughout Grayslake will host bikes that people can rent by scanning a code. Imagine those electric scooters that can be found in many college towns, except instead of scooters they use bikes. This service will be fully implemented in spring 2021 and will pilot for two years. “We’re one of the first municipalities outside of a large city to have a program like that,” explains Grayslake trustee and Economic Development Commission head Shawn Vogel.

Another project already underway by the village is further developing the newly finished Gelatin Park, located immediately south of Central Park. While it may seem somewhat open right now, work is underway to make it a more visually striking place. “One [change is an] ice skating rink during the winter months, which should be completed by the end of this year, and then some of the additional landscaping or hardscaping, we’re going to try and [implement] a little bit of that this summer,” Vogel continued.

One of the biggest projects underway in Grayslake has been in development for over 10 years: A massive, 650-acre, $750 million master-planned development taking shape on Peterson Road west of the Lake County Fairgrounds. The enormous project, already partially underway, is being referred to as Cornerstone of Grayslake. The project, first proposed in 2009, was stalled initially by the recession, however now, 12 years later, has finally broken ground. The first project in the development has been the opening of a massive warehouse for Medline, which is currently based in Libertyville. The warehouse is the 5th largest in the country, and is phase one in developing a massive plot of land between Alleghany Road and Peterson Road, southwest of the FedEx warehouse on route 83. The next phase is developing a mixed residential and commercial development on the southwest corner of IL-83 and Peterson Road, and a solely residential development west of Alleghany Road. If you’ve ever been to The Glen in Glenview, this would be the design concept that the retail development would follow. The retail area would also include nearby row townhouses. For those curious, future students who are sure to move into the developments would attend Mundelein High School, as GCHS’ boundary is immediately north of the development, by the Saddlebrook Farms retirement community.

GCHS students may, however, see an influx of new students in the next few years as M/I Homes is in the process of proposing a residential community called Tribeca immediately south of Prairie Crossing. If you are a congregant of Christ Church Crossroads on 137, the development would be immediately west of the church, on the northeast corner of Casey/Midlothian Road and 137. “I’ll use Libertyville as an example, they’ve had a lot of developments that have been going up in their downtown… and it seems like once one starts, others come, so it is possible that [M/I Homes] could spur other interest in Grayslake,” Vogel went on to say. “It is possible that this could spur other residential development and that’s again why we have out plans and [why] our planning parameters are so important to make sure that we get the right kind of quality development for the town.”

Now for something that will likely affect our own Grayslake Central community: What does the future of our school look like? Just like the future of Grayslake as a whole, we first have to look at the past. In the late 1990s and early 2000s, Grayslake’s population was booming. Grayslake Community High School, as it was known then, only comprised the district building and arena, the art and student services wing, the cafeteria, big and small gym, and the social studies hallway. The field house and math hallways were just finished and the population at GCHS was expected to grow to over 2,500 in the years to come. The D127 Board of Education was faced with the difficult task of what to do with the massive influx of students. Several ideas were proposed from purchasing and demolishing houses surrounding GCHS to allow for further expansion, or even building an entirely new campus. Ultimately, a mix of these plans was chosen. GCHS would expand to the north, building a new fine arts wing, expanding English classrooms, and building a state-of-the-art 500 seat theater. This expansion went through and opened in the early 2000s. Of course, then the plan for the construction of a new campus was started, which saw the opening of the brand new Grayslake North High School in 2004 as a freshman campus, with all students living north of Washington Street relocating to the school after 2007. There were even more plans, however, plans stalled by the 2008 recession. “[The recession] slowed a lot of growth, my prediction back then would have been that by this year we would’ve had a Grayslake West [High School],” explains GCHS principal Dan Landry. “Do I think it could happen again? Absolutely, and right now, in today’s climate, there’s a lot of hope for growth, but I don’t think you can count on the growth yet,” Landry explained.

As for what students can envision in the physical appearance or student experience at Central, Landry gave insight into some concepts and plans for the future of our school. “There are a variety of plans [for GCHS]… we have drawings for a revamping of the cafeteria… [and] the athletic locker rooms could have improvements, there’s [another] plan where the cafeteria gets expanded, [overall] there’s a variety of plans that are out there,” Landry mentioned. “What I do know is that we have a new Associate Superintendent for Business Services, our CSBO Abe Singh, and just very recently, we were talking… along with our Director of Buildings and Grounds Dan Gonzalez… about a multi-year plan for these exact… ideas. The limiting factor, which is the limiting factor for pretty much everything, for sure is money. We try our best to be frugal with the tax dollars that the families get taxed and provide us [with] to run our school.”

Overall, from the commercial developments taking shape on the southern half of Grayslake, to the concept plans for GCHS, there’s a lot of potential for our small town, which may not be so small looking into the future. Really anything can happen with time, and it’s surely possible that 20 or 30 years from now, Grayslake may be a truly unique town in the Chicago area, mixing small-town charm with its massive infrastructure, and booming economy.