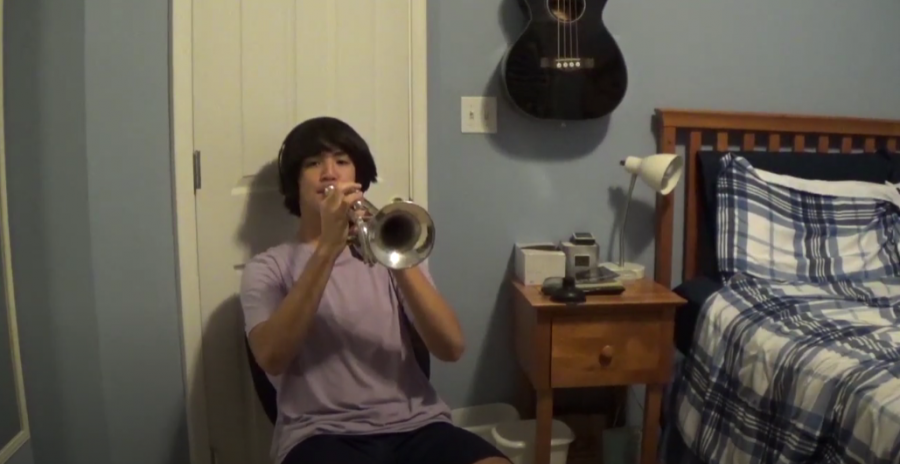 Tri-M student Jacob Park plays his trumpet for his performance.

Every year the Tri-M National Music Honor Society hosts Cabaret night. Cabaret night is an event where students choose how they want to display their musical talents to others. Usually it is in person, but due to the pandemic, it was streamed on Youtube this year. Although it was performed on a different platform, the students and staff made the best of it.

Tri-M sponsor Michael Gutierrez, who performed in the event, explained how important it was to make this event happen this year.

“It’s traditionally been a big event in the music department. So, the real challenging but fun aspect of it was putting it in a virtual format, which allowed us to open it up to more band and choir students. . . But it just brings all of the musicians together and performing music that they love, which I think is really special,” Gutierrez said.

Having a virtual Cabaret Night also opened up opportunities for staff to perform.

“We opened it up to Mr. Bertino to perform as well as the band director and myself. I sang a piece on the cabaret night program, which was really fun. It involved more of our music department than it traditionally has,” said Gutierrez.

Although many upperclassmen have experienced Cabaret Night in person, this was freshman John Vagnoni’s first time performing in the event.

Not having to perform in person may have taken away some of the feeling of a regular Cabaret Night, but it did make the performers more comfortable when performing.

“I feel like it shows another piece of everyone’s personality, just being in their element and being comfortable, giving their like, 100% in the performance,” said sophomore Annalise Eisenberg.

The members also gave some information on upcoming performances to look out for soon.

“There is going to be… a winter kind of Cabaret Night sort of where people can sing a Christmas or holiday themed song if they wanted to. They can play an instrument as well, so that’s going to be coming out,” said Vagnoni.

So look out for more upcoming virtual performances from the Tri-M National Music Honors Society later this school year.