Hybrid learning will be delayed to January 2021

The general unpredictability on where things are going to go with health metrics has caused a great deal of stress for staff and students alike and have led to schools to make the tough decision on whether or not to bring students back into school buildings. 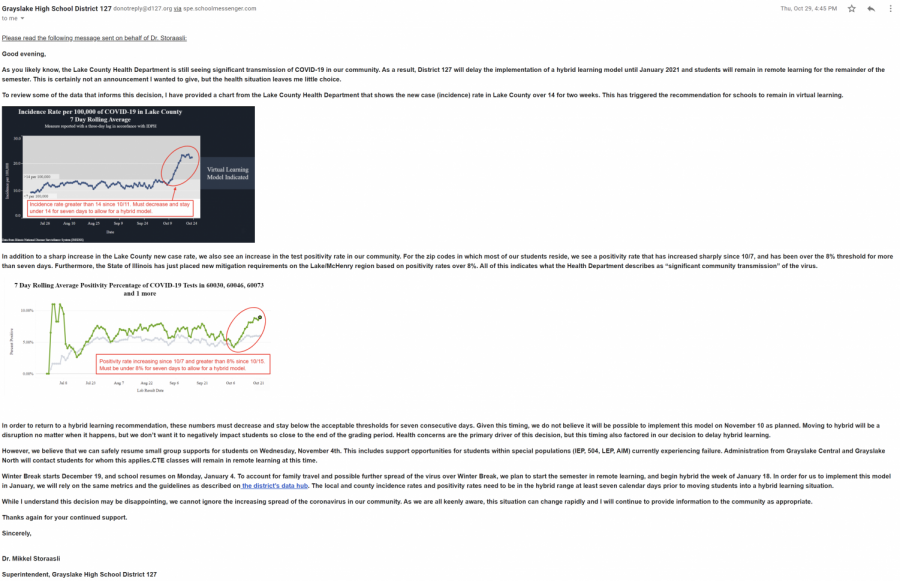 This is the email sent out to students informing them that hybrid learning was to be delayed to the second semester.

On Oct. 29, students received an email from D127 superintendent Mikkel Storaasli informing them that the proposed Nov. 9 hybrid learning plan would be postponed until the second semester, upsetting and relieving some. The decision to return to school buildings has been delayed six times now due to the COVID-19 pandemic, from April 1o May 1, to Aug. 18, then Oct. 18, Nov. 9, to now, Jan. 18. Overall, the decision to reopen has been a hot topic recently, with many districts moving to a hybrid learning model, while many continue to stay in a full-remote model. The general unpredictability of where things will go with health metrics has caused a great deal of stress for staff and students alike and has led schools to make the tough decision on whether or not to bring students back into school buildings.

Currently, two of the largest high schools in Illinois have taken very different approaches for the remainder of the semester. Warren Township High School, which serves Gurnee, Grandwood Park, Third Lake, Wadsworth, Gages Lake, and parts of Waukegan, has made the decision to go entirely remote for the remainder of their first semester, citing a noticeable uptick in COVID-19 metrics. The district, which services over 4,000 students, originally planned to institute a 25% hybrid learning model to begin the week of Nov. 9; however, postponed it to their second semester at the earliest. An October letter sent to parents by district superintendent John Ahlgrim states that “Due to this probable delay of implementation [of hybrid learning] and the limited weeks remaining in the first semester, [Warren] will complete this semester with our current remote learning plan and schedules.” In stark contrast to Warren’s decision to go fully remote, New Trier High School, which serves Glencoe, Winnetka, Kenilworth, Wilmette, and parts of Northfield, announced that after having to pull out of their hybrid learning model in early October as a result of an uptick in COVID-19 cases, they would be re-entering hybrid learning the week of November 10. The decision was made after the district began a mandatory weekly COVID-19 testing program for students participating in athletic events and for students planning to participate in hybrid learning. A month after the testing program started, a communication to families was sent out by district superintendent Paul Sally, stating that “The Board [of Education] agreed to begin at 25 percent hybrid instruction with a path to 50 percent hybrid instruction should screening program results and operational metrics indicate the District can do so safely.” As of late November, the school’s two campuses have successfully been operating in a hybrid learning model while most schools in the area have stayed remote.

D127 took the full remote avenue. “We’re kind of taking the… slow and measured approach to bringing students back into buildings,” Storaasli went on to explain. “There was just so much uncertainty, with how the virus worked, what numbers we’re supposed to be looking at, the question is, ‘Is it safe enough to come back into school?’” While the answer to that question right now is no, that may not be the case come January.

The decision to move the hybrid start time to Jan. 18, 2021, resulted from planning for winter break and the current uptick in cases. At the end of the semester, Storaasli explained, “Does it make sense for us to implement this brand new hybrid model [now?]… It’s going to be new for students, [and] new for parents… [just] as we’re trying to get a lot of students across the finish line, grade-wise, does that make sense? Or does it make sense to tell everybody… this is what you can plan [for]: [If possible]… we will start [hybrid] in the new semester, there are going to be hiccups with the hybrid plan… but it’s not so close to the end of the semester that it might jeopardize grades.”

A great resource for any and all things hybrid learning would be the D127 Hybrid Learning Plan, which can be found by clicking here. The hybrid plan was amended multiple times, from its initial announcement in July 2020 to the final version announced in October 2020. Some notable changes include making the decision not to offer lunch as a result of logistical challenges, end the school day earlier than originally planned, and increase the group sizes to two groups, with 50% of the student body in each, replacing the old plan for three groups, with 33% of students in each group.

Overall, this year hasn’t been predictable by any stretch of the imagination. Every single student at GCHS has been affected by COVID-19 in some way, shape, or form. The best thing we can all do right now is to take the situation day-by-day. Practice physical distancing, wear a mask when you must, stay home whenever possible. By doing these things and staying vigilant, we can persevere and come out better than we started.