GCHS was more than determined to celebrate Veteran's Day 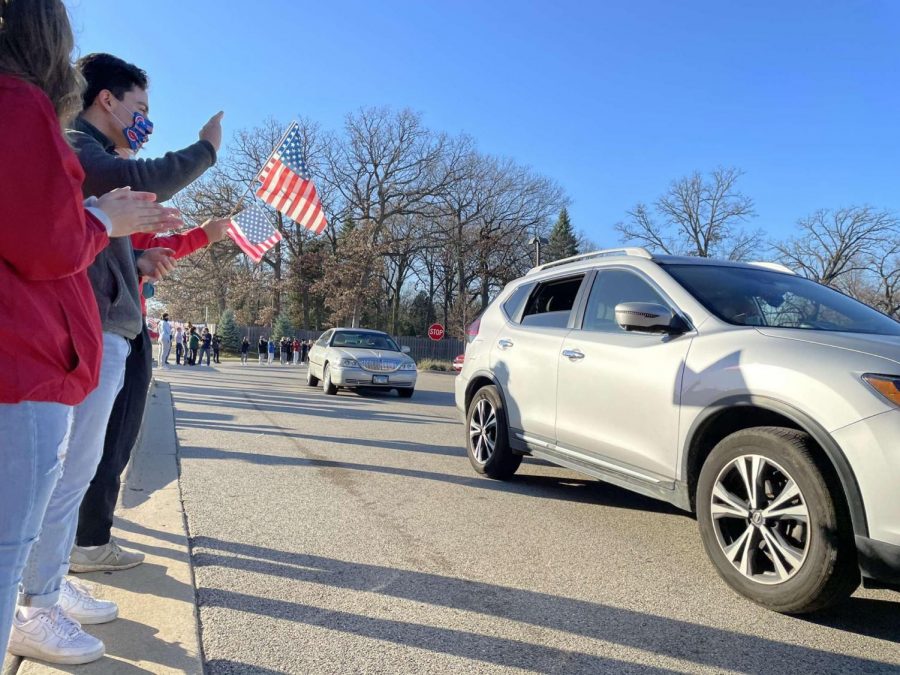 Students applaud and thank veterans as they drive by.

On Nov. 11, students and faculty gathered in the main parking lot to honor veterans throughout the community. The drive-thru parade welcomed over fifty cars both driven and accompanied by veterans. The parade started with the playing of the National Anthem, as veterans saluted and students held their hand over their hearts, accordingly. Shortly after, PSP teacher Dustin Chierico gave the go-ahead for the parade to start. Patriotic music played as the cars drove by. Numerous cars had a window rolled down for the veterans to waive at the students.

Social studies teacher and Army Reserve Lieutenant Colonel Glen Roeck stated, “I was very pleased with how the parade played out. We really wanted to do something that incorporated the students. Specifically talking about the PSP and the Key Club programs and then of course any other students that wanted to come out and support. Just from the feedback I heard from veterans, they really appreciated it, and they really felt like they were honored. And I think it was an overwhelming success.”

On any given year, GCHS hosts a Veteran’s Day breakfast that starts with an assembly where students, teachers, and the veterans gather in the field house. A guest military speaker is invited to share their knowledge regarding the special day and their experiences in the military. After the speech is over, a standing ovation is given as the veterans walk out of the fieldhouse. The veterans are then treated to breakfast catered by local businesses. Each class period, current and former military personnel speak in the theater, as well.

Social studies department chair Jason Janczak remarked, “It is a powerful day, and we wanted to add the [following] components: How do our students have a chance to share their appreciation with our veterans as we do usually at our opening day assembly, where everyone stands up and gives them a standing ovation as they walk out. So how do we replicate that and then how do we replicate the learning experiences that students have throughout the day with the speakers in the theater? We knew we couldn’t have breakfast so that was off the table, but we still wanted to keep those major points together. So we came up with the parade idea to kind of simulate the morning. And then we also came up with the list of the speakers to kind of simulate the speakers that go on throughout the day in the theater. “

Instead of hosting speakers in the theater, this year, a link was sent out to students that incorporated Veteran’s Day videos. The speakers in the videos included General Wesley Clark, U.S. Senator Tammy Duckworth, Admiral William McRaven, and Captain Wes Moore.

Veterans were gifted coupons from the Vine, Sammie’s, and Fred’s Diner as another token of appreciation.

“I saw a lot of veterans with tears in their eyes; that really shows and indicates how meaningful [the parade] was to them,” said Roeck.