Boys basketball prepares for season despite winter sports on pause. 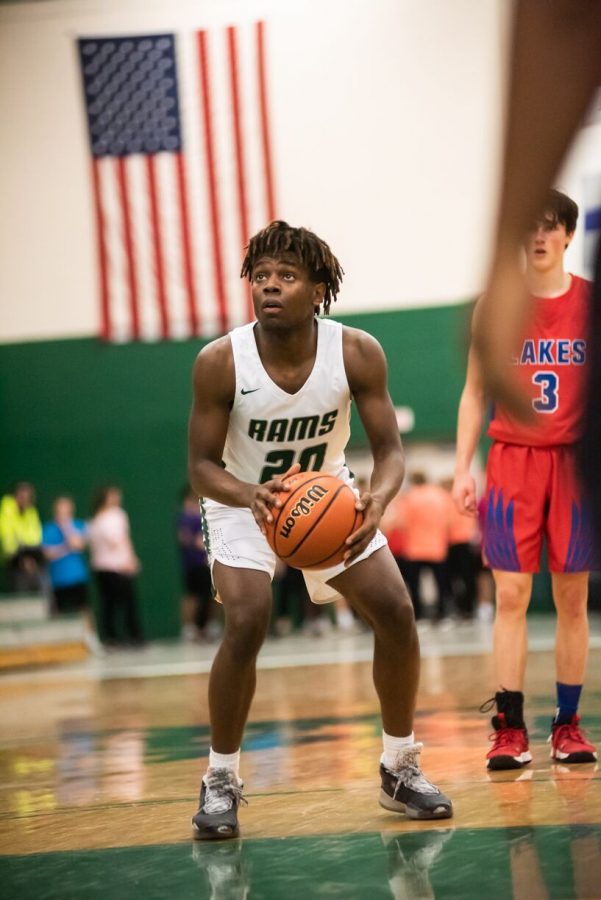 Amarion Coleman in an attempt to make a free throw shot to score against Lakes, last year.

Even though Governor Jay Robert Pritzker decided to temporarily put the winter sports season on hold with IHSA’s recognition, varsity boys basketball coach Brian Centella still starts getting his hands busy with his approaches and strategies on handling practices and game plays.

Coach Centella makes sure that their upcoming practices would be effective, and at the same time, become a chance for the team to improve, not only about their basketball skills, but also on the players’ individual growth.

Centella said, “It’s all about creating a program and creating an environment where people and young men, in my situation as the boys coach, are going to grow as individuals, grow as teammates, grow character, and develop dedication to the sport but more importantly, become better people throughout the process.”

The boys basketball team’s sheer determination and hard-working ability are the things that Centella focuses on in order to make them better athletes and improve their mentality during games.

“My goal for my team, I’m kind of unique in the sense that, of course, we all always think about ‘we want to win’. But that’s not what my expectation is. My expectation is just to get a little bit better every day,” said Centella.

Boys basketball player Amarion Coleman shares that keeping in shape physically and mentally are the only things to do in order to get better. “The only thing that we can do is keep getting shots up and getting our bodies in better condition. So when we do have a season, we will all be at our peak. Every day just keep getting shots up. I mentally prepare myself for my upcoming challenges,” said Coleman.

As for conducting the practice, Centella intends to improve himself to be more flexible in order to accommodate all the changes that occurred during this pandemic. He pointed out that it’s crucial to follow all health and safety guidelines that were laid out for everyone and is one of the most challenging things to do all the time.

Centella also said that the most important thing for him to do as a coach is to create a space for the boys wherein they will be able to feel secured, inspired, and eased. “I think the biggest thing is to create a positive atmosphere. I have to make sure that I have the energy and flexibility in creativity to make that work,” Centella said.

Centella mentions that they don’t have any specific strategy, instead, they plow their way to victory through hard work alone and the great leadership of everyone on the team. “There’s no secret drill. There’s no secret halftime speech. The only secret is hard work; so now, fortunately, we have really good leadership on our team,” stated Centella.

On the other hand, Coleman shares his thoughts about the hindrances that they bumped into before, and he sees that changing of mindset would be the solution. “Some challenges that we faced last year were playing at the level of our competition. We were better than a lot of teams that we played, but instead of playing above and beating them, we played down at their speed and ability which really hurt us. We will prevent this from happening by always approaching each game with the mindset as the predator and not the prey,” Coleman said.

Centella also shares that adversity in the team is probably the most difficult thing to overcome in the team. He said, “The biggest thing is when teams face adversity. You can’t hide from it. You have to face it, and address it, talk about it, and grow in it.”

With Centella’s game plan, Coleman finds his coach, Centella, an effective coach. “Coach is very effective. He helps my teammates and I out with anything we want. If we want to stay after to get shots up, he will find a way to help us. He has always been there for us,” said Coleman.

“I’m so lucky that I have such great players. I’ve been so impressed with how my players have handled the adversity of this pandemic and of this COVID situation. It’s really shown a sense of maturity in these players, and I’m so proud and of the way they’ve handled themselves,” said Centella.