Who is the new justice, Amy Coney Barrett? 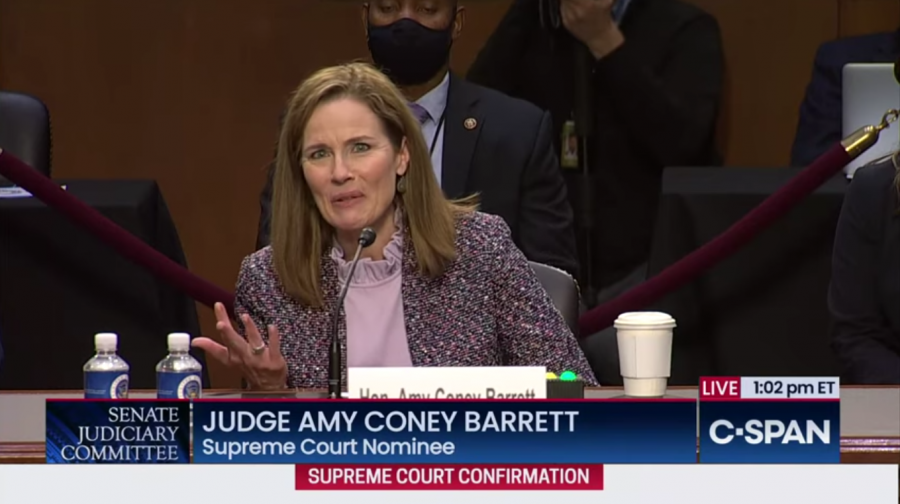 As of Oct. 27, 2020, Amy Coney Barrett was sworn in as the new justice of the Supreme Court, taking the seat of former justice, Ruth Bader Ginsburg. According to an article written by Whitehouse.gov, her journey to becoming a justice of the Supreme Court started early when she served as a law clerk to Judge Laurence Silberman at the US Court of Appeals for the District of Columbia Circuit from 1997-1998 and later was nominated by President Donald Trump to the seventh US Circuit of Appeals on May 8, 2017. She was later confirmed as a federal judge by the Senate with a vote of 55-43, on Oct. 31, 2017. As of Sep. 26, Amy Coney Barrett was appointed by President Donald J. Trump for the Supreme Court to fill the seat of passing justice, Ruth Bader Ginsburg. Barrett was officially sworn in as the 115th justice on the Supreme Court on Oct. 27, 2020, with a confirmation senate vote of 52-48.

Social studies teacher Georgia Brown said, “She was a federal judge for the US Court of Appeals for the Seventh Circuit, and many Supreme Court justices do come from the US courts of appeals throughout the nation, so that’s a commonplace that Supreme Court judges are selected from the US courts of appeals.” While it was not a guarantee for Barrett to become the new justice, her achievements put her in a better position for nomination.

During her earlier years, Barrett attended Rhodes College and was later accepted into Notre Dame law school, where she also taught.

From 1998 to 1999, Barrett also worked alongside former justice Antonin Scalia. Having worked with him for a year Barrett had become a supporter and aligned with his views. In Amy Coney Barrett’s Judicial Record in Criminal Justice Cases, it stated that “Barrett has publicly aligned herself with her mentor, the late Justice Antonin Scalia. Like him, Barrett is an originalist, meaning she seeks to apply the Constitution according to her understanding of what the Framers intended it to mean.”

When accepting her formal nomination for the Supreme Court Barrett stated “His judicial philosophy is mine, too — a judge must apply the law as written.”

According to her ruling on cases like the U.S. v. Terry case and the Kantar v. Barr, Barret has stayed in her original route of closely following the interpretation of the constitution.

In the U.S. v. Terry case, Barrett used the Fourth Amendment to argue that the police had no right to search a man’s house without a warrant or the approval of the homeowner. In Amy Coney Barrett’s Judicial Record in Criminal Justice Cases, it states, “Barrett wrote that Drug Enforcement Administration agents had violated a man’s Fourth Amendment rights when searching his apartment… Barrett wrote that because the government did not have a warrant, the evidence discovered in the search could not be used.”

Similarly in the Kantar v. Barr case, Barrett used the Second Amendment to support man’s right to bear arms. In this case, a former felon was prevented from owning a firearm, which led him to sue the federal government for violating his freedom of the Second Amendment. While the court rejected his statement, Barrett followed the Constitution by stating that only those who have committed an act of violence or their position of a gun would put others at risk and would be denied the position of a firearm. In Amy Coney Barrett’s Judicial Record in Criminal Justice Cases, it also states that “The appeals court rejected [Kantar’s] claims, but in Barrett’s lengthy dissent, she maintained that historical evidence supports the position that only those ‘who have demonstrated a proclivity for violence or whose possession of guns would otherwise threaten the public safety’ may be legally prevented from owning a weapon in perpetuity, characterizing the application of the law to the man as an unconstitutional violation of his Second Amendment rights.”

There are nine Justices in the Supreme Court ensuring American’s quality under the law. The Supreme Court covers current issue cases like gun control, abortion, LGBTQ+ rights, etc. After hearing oral arguments, the Supreme Court comes to a verdict by following the Constitution. Justices may also present their stance and later all sides are brought together and discussed. After all, arguments have been discussed a Justice is then assigned to write the opinion.

According to an article written by uscourts.gov, “The Justice in charge of writing the opinion must be careful to take into consideration the comments and concerns of the others who voted in the majority. If this does not happen, there may not be enough Justices to maintain the majority. On rare occasions in close cases, a dissenting opinion later becomes the majority opinion because one or more Justices switch their votes after reading the drafts of the majority and dissenting opinions. No opinion is considered the official opinion of the Court until it is delivered in open Court (or at least made available to the public).”

With Amy Coney Barrett becoming a new member of the Supreme Court, no conclusions can be made about her stance on certain issues.