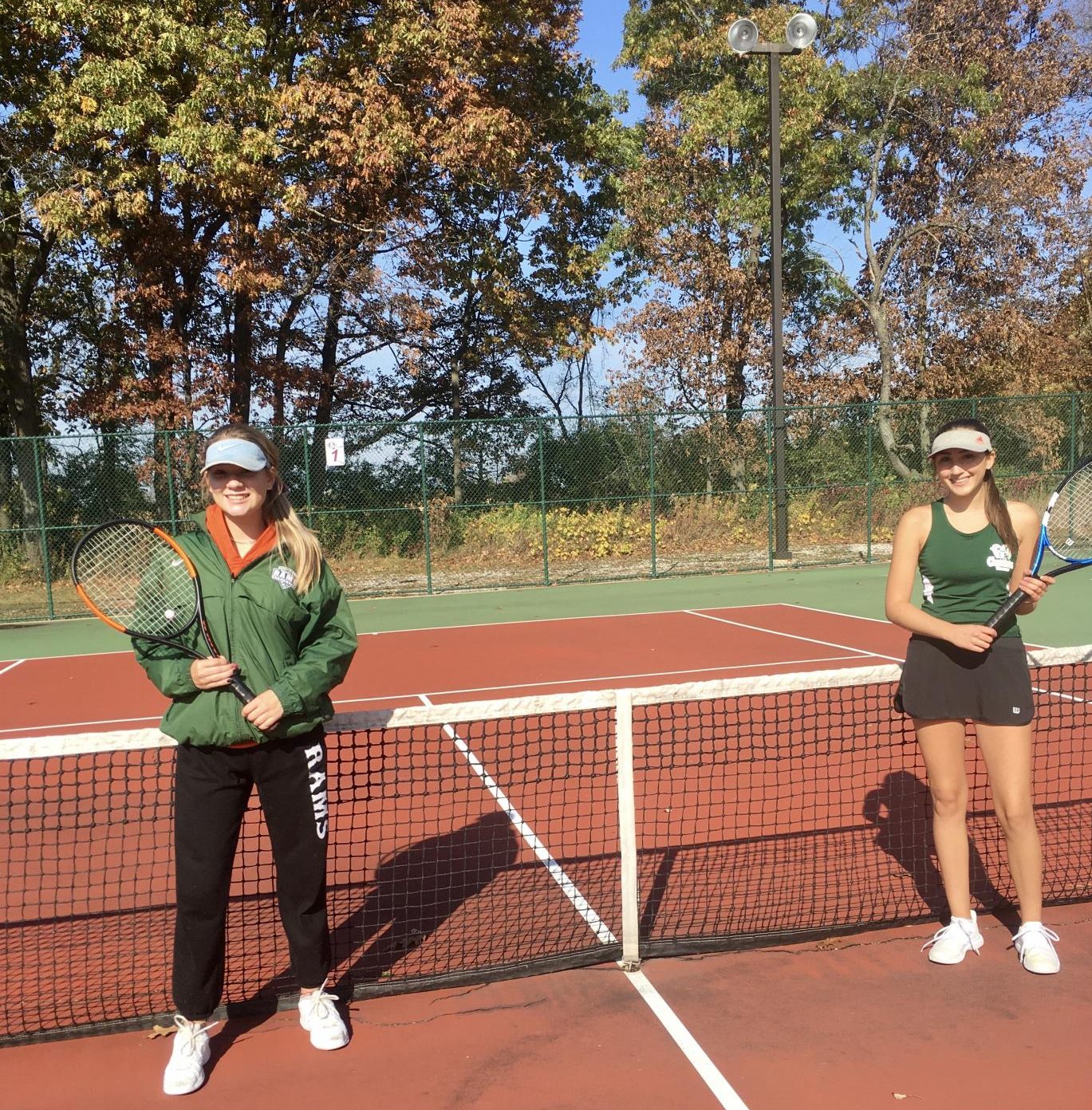 Photo of Aviva Krill (left) and Grace Caldwell (right) before clashing with Wauconda in the sectionals finals match at Lakes.

GCHS girls doubles teams Grace Caldwell and Aviva Krill places 2nd in the sectional finals after a tough match with Wauconda; Mackena Luger and Sravya Yellapragada snag  4th place in the IHSA sectionals tournament, which means both duos qualify for the state tournament. The girls varsity team, overall as a team, brought home 2nd place in the 1A Lakes Sectional Tournament, which ended Wednesday, Oct. 21 at Lakes High School.

“The team that took first in the sectional was going to be a hard competition, which we knew going in. Our goal was to try our best and get as far as we could, and we ended up being happy with our spot at 2nd place out of 20 teams,” said Krill.

Collectively, 1st doubles team Caldwell and Krill overpowered Antioch on Oct. 16 through exhibiting their cunningness forcing their way to reach the state tournament level and seal a spot in sectionals finals.

Unfortunately, the state tournament was canceled this year due to the current COVID-19 pandemic.

Likewise, the girls varsity team snagged an undefeated finish in dual meet conference matches with a 10-2 team record in this year’s tennis season.

The first match of their season began Thursday,  Aug. 20, at Vernon Hills Athletic Complex (VHAC) – Tennis Courts,where the girls’ won their first hard-fought match against Vernon Hills with a 4-3 win record. Historically, Vernon Hills is known for having a strong team, which was a good start for the girls on their road to undefeated in conference.

After another tough battle with Warren Township’s team, the varsity girls’ tennis team started dominating the season. With hours of training and strong efforts, claims GCHS girls tennis coach Chuck Lawson, this allowed the girls to pummel down every opponent, which enabled them to record five straight wins in the conference.

“We practice at least two hours every day–tennis skills and conditioning… Putting the players into different situations helps, but stressful situations during matches is the only way to learn,” according to Lawson.

Similarly, captain and season MVP Mia Falconi, who ranks as the team’s number one singles player, states that the team took advantage of the summer camp in order to get in shape and to come up even stronger for this season.

“We work really hard during the summer. We were fortunate enough to have… like our summer camp. So we worked really hard during that time to prepare for the season,” Falconi stated, “I have improved a lot since freshman year I learned a lot. I’m…going through the whole entire season. And I’ve improved as a player myself. I’ve been practicing more,” she added.

In addition to being the dual meet conference champions, these athletes played through the hindrances their team encountered, such as weather, pressure of success, and the current COVID-19 pandemic.

“Probably some of the biggest hardships were just being ready, all the time and constantly going to practices, and the pressure. Definitely the weather element kind of just…  it affects everything. But definitely just like the harshness of always being at work and things like that,” according to singles player Sophia Schleg.

Lawson exclaims that the players did a “very good” job, and that it was “a very successful season” for him and the girls this year.

The girls additionally set their own personal goals throughout the season. “My main goal for this season was to go undefeated in conference…I really wanted to prove my ground,” explained Schleg.

These young ladies dominated the entire season with power and endless determination which seals the overall champs in dual meet conference and earned the capacity to qualify for state.

According to Lawson,“Tennis is a sport that you can play at any time with a friend or on a team. Tennis is a lifetime sport,”