The nostalgia of the reclining seats, the overpriced snacks, the smell of the theater, and the weird feeling of anticipation as the trailers played were feelings all too familiar to us before the COVID-19 pandemic. 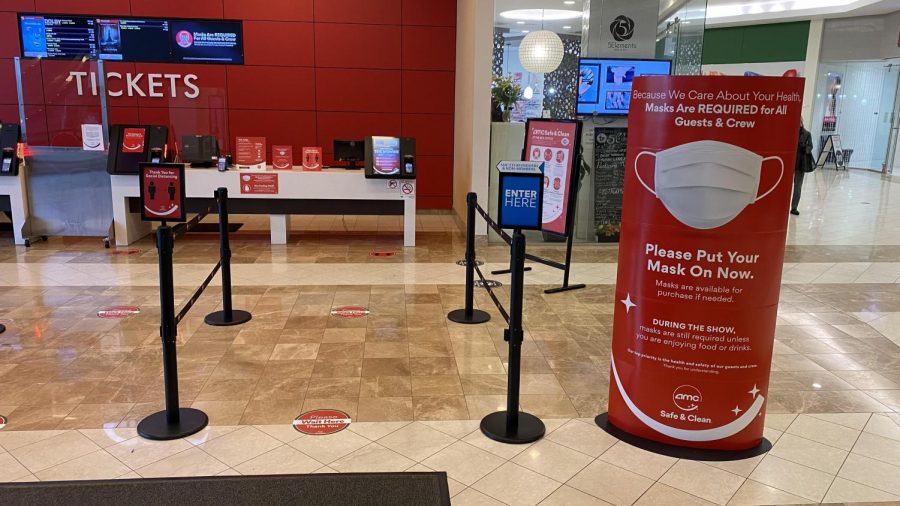 AMC Hawthorn 12, like most theaters across the country, has had to make significant adaptations to stay in business, namely requiring masks, social distancing, and plexiglass barriers.

The nostalgia of the reclining seats, the overpriced snacks, the smell of the theater, and the weird feeling of anticipation as the trailers played were feelings all too familiar to us before the COVID-19 pandemic. The occasional laugh, tear of sadness, and that feeling of nervousness as the main character struggles to make it out alive were all commonplace feelings when going to see a movie was still a regular pastime.

Of course, the world’s changed a lot since then. In the early days of the COVID-19 pandemic, we were confined to our homes most of the time, passing the day watching Disney+, Netflix, or Hulu, binging the first season of Outer Banks, and of course, longing to see other people again. In the latter days of the pandemic, drive-in movies were all the rage, with people flocking to drive-in movie theaters, hoping to experience something closer to our old life. More recently, as movie theaters started to reopen, the option of going to a traditional movie theater presented itself once again, and with the release of Christopher Nolan’s “Tenet”, which was billed as the first major movie release since the beginning of the COVID-19 pandemic, many begin to wonder: will people want to go back to a traditional movie theater?

The global film industry, which is valued at about $136 billion, has had to make massive adaptations to survive the extremely turbulent global economic crisis. As a result of the COVID-19 economic crisis, the industry lost over $10 billion partially as a result of the cancellation or indefinite postponement of major titles such as “Wonder Woman: 1984”, “Soul”, “Black Widow”, new “Star Wars” movies, and the sequels to “Avatar”. In addition, because many major titles moved to online releases, via websites such as Netflix, Disney+, and Hulu, movie theaters haven’t been able to screen new movies. Some chains such as AMC and Regal in the early days of the pandemic ran classic movies to keep their doors open. Now, of course, major movies are slowly beginning to trickle back into the traditional movie format, meaning that they will be able to likely end up generating more revenue.

To stay in business, movie theaters as a whole have had to completely reimagine the movie theater experience. For iPic Theaters in South Barrington, this meant having to make material changes to their day-to-day operations. Traditionally, iPic has priced its seats anywhere from $15 to $25. As a result of a lack of business, they had to bring their prices down to $9 to $13  per ticket. The most significant price cut was their Premium Plus seating option, which went down from $25 to $13, a 52% decrease in pricing. Also, theaters such as AMC Hawthorn 12 in Vernon Hills have required masks to be worn at all times while in the building except for when eating food, and they have reduced theater capacity to 40% and have staggered seating to allow for social distancing between groups. Many theaters are also now staggering movie start times so theaters can be deep-cleaned before and after screenings.

Overall, it’s safe to say that COVID has changed things for the movie industry; however, there’s a light at the end of the tunnel. The industry, despite taking some major hits with the postponement of some major titles, is still going strong, adapting to the very strange new circumstances it’s in, and is looking to survive the pandemic and hopefully, finally, get some appreciation for all those reclining seats, overpriced snacks, and weird smells, and most importantly, to come out of it with a newfound appreciation for the work being done to make the best experience possible.