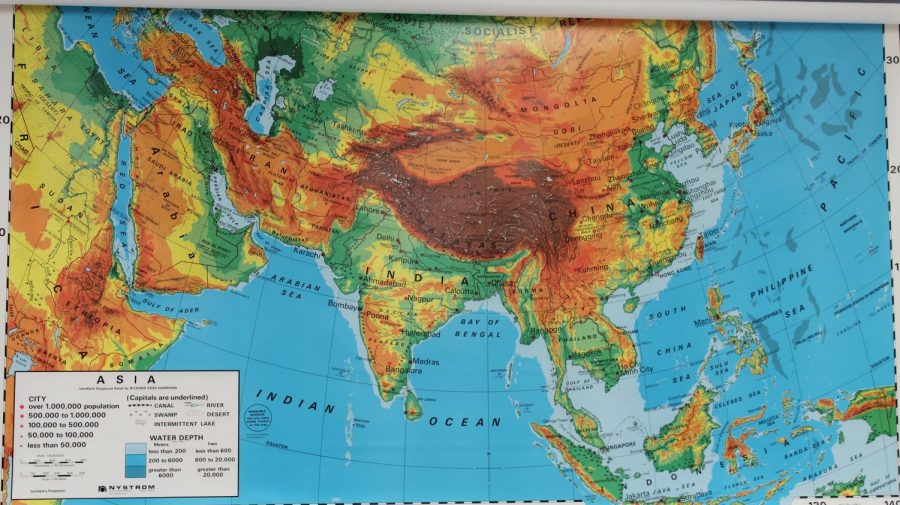 Iran is located in Asia near India

On Jan. 8, 2020, according to many news organizations, it seemed that war was inevitable. The Iranian Revolutionary Guard had fired at least 12 missiles on two U.S. Coalition bases in Iraq, in retaliation for the strike on their terror leader, Qasem Soleimani, five days before. Almost immediately, Iran State Media reported that at least 80 American soldiers were killed in the retaliation. The truth is, there were no U.S. casualties, and 64 soldiers were wounded. As of now, they are in stable condition, according to the Department of Defense.

The morning after the attack, Trump made a statement to the nation, saying, “As long as I am President of the United States, Iran will never have a nuclear weapon.” Trump also added that, “Iran appears to be standing down, which is a good thing for all parties concerned.” The overall U.S. response has been to impose more economic sanctions on Iran.

Senator Richard Durbin from Illinois, Senate Assistant Minority Leader, stated, “Iran has a long and troubling pattern of behavior, including repression of its own people, sponsorship of violence in the Middle East, attacks on our personnel in Iraq, and illicit pursuit of nuclear weapons.”

This recent growth in Iranian regional power was brought upon by the Iran Nuclear Deal, which restricted Iran’s nuclear program for one decade, with the original deal ending by the next election year, 2024. The nuclear deal also allowed the unfreezing of cash assets for the Iranian government, and an open economy, increasing the Iranian people’s wealth.

However, according to some members of the Congressional Subcommittee on the Middle East and North Africa, more harm was done than good. Committee Chairwoman Ileana Ros-Lehtinen stated, “Because the IRGC (Iran Revolutionary Guard Corps) controls so much of the Iranian economy, it is poised to gain billions of dollars from the deal and Iran’s economic growth. When the [Obama] administration argues that the Iranian regime will invest its sanctions relief into infrastructure, what they are not telling [the American people] is that the IRGC, a terror organization in its own right, will be the one cashing in…  more money will be funneled to IRGC companies, who will then turn right around and use that money for their nefarious activities.”

In 2018, when President Trump pulled the U.S. out of the Iran Nuclear Deal, and reimposed economic sanctions on Iran, their further development of power in the Middle East was slowed. However, there are multiple countries still backing the deal, like France, Germany, and the UK, funneling millions of dollars of aid, or an “alternative payment mechanism” to dodge sanctions, according to BBC.

Since the U.S. left the agreement, Iran has committed several acts of terror and war against the United States, and other nearby countries, including the downing of a drone, firing rockets on Israel, and more. High-profile Senators, like Durbin, call for a return to the Iran Deal, which granted funding to the Iranian pursuit of power. Durbin stated, “I believe the United States should rejoin the nuclear agreement and work with our allies to contain Iran’s other malignant behavior.”

However, these actions ultimately led to Trump’s strike on Soleimani, establishing deterrence with Iran, and halting this behavior for the time being.  In his State of the Union speech, Trump stated that, “Our message to the terrorists is clear: You will never escape American justice.  If you attack our citizens, you forfeit your life.” He continued on, saying that, “Because of our powerful sanctions, the Iranian economy is doing very, very poorly.  We can help them make a very good and short-time recovery.  It can all go very quickly, but perhaps they are too proud or too foolish to ask for that help.  We are here. Let’s see which road they choose. It’s totally up to them.”

The real question on many students’ minds is, are we headed to war?

Jim Plaza the current events teacher at Central explained that there may never be an end to the tension between the U.S. and Iran at least in the near future.

Plaza stated, “I don’t think at the moment we’re going to war.”

He later explained that, “I had a bunch of students come in, saying, ‘Are we going to war?’, ‘Is it World War III?’ I think most of that was social media. I would just caution people to, before you make bold assertions and bold claims, you get as much information as you can.”

As many people believe, war does not start if both parties, America and Iran in this instance, do not want war.

According to Durbin, “Ultimately, Americans want peace — and I believe the Iranian people do, too.”