As the season ends, the boys bowling team has a string of successes, including qualifying for sectionals. 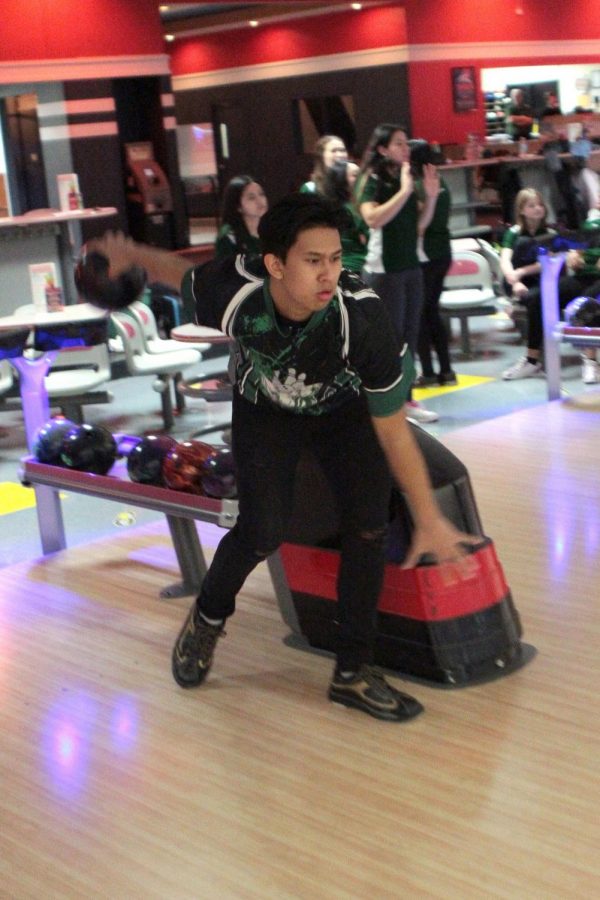 Russnuell Carcellar, one of the juniors who qualified for sectionals, focuses intensely while bowling. Photo by Jennifer Maiden

They did so by scoring 1174 and 1172, respectively, across six games at regionals. While Carcellar and Terronnez did not qualify for state, the boys’ bowling team had a series of successes throughout the season.

This season, the team won several matches by over 400 pins. Individually, 18 of the 25 members of the team had an average score of over 200 a game. Many of them earned these scores after having started the series with averages in the 80s or less.

“I’ve seen incredible jumps from some bowlers that, going into the season, I would have had no idea they’d even be competing for a varsity spot,” said coach Brian Dovichi.

Even the team captain, senior Miles Pletcher, said he felt he improved over the course of the season, gaining more consistency in his performance.

While Pletcher himself was not one of the players who qualified, the team still went into the postseason.

“At regionals, we take all of the schools that are nearby, and we all bowl. Four teams and 10 individuals end up making it to sectionals,” explained Terronez. “Russ and I had both made it as individuals because we had shot high series at the regionals”

At sectionals, Terronez scored a 1090 series, and Carcellar 1120. While these scores are impressive to most people, they were unfortunately not enough to qualify for state.

“It’s a bummer that we haven’t sent someone to state this past year,” said Terronez. “But there’s always next year”

Many people who are a part of the team have stated that bowling is a great sport to participate in for personal growth and making friends in high school.