Best Buddies shoot toward their mission 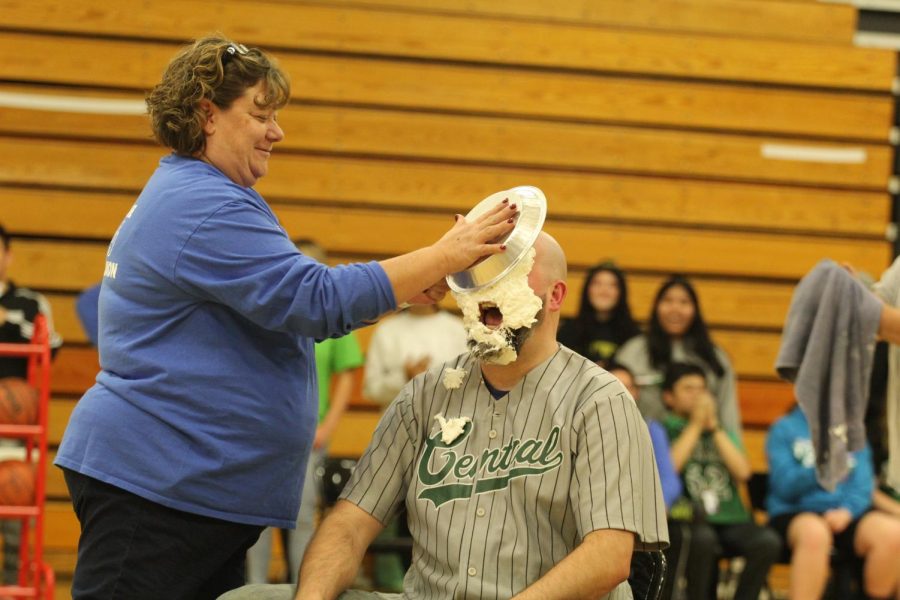 Security guard Dan Gallagher gets a face full of pie.

With a line of people down the hall buying merchandise and making posters to support the buddies, the Best Buddies basketball event begins. The event takes off with the buddies being introduced by special education teacher Steve Reitman, followed by a performance from the JV and varsity poms.

In addition to the game, the silent auction is up and running, consisting of donations from local businesses or families to raise money for Best Buddies. Dean Corey Schwalb and security guard Dan Gallagher are pied in the face with enjoyment from the crowd to raise money as well.

As the game begins, the crowd cheers, while watching both teams compete against each other. There were people using clappers to cheer the teams on, many people were standing, and the cheerleaders hyped up the crowd.

The first point was officially scored by Dylan Kozlov on the green team. The crowd roared as the teams got more competitive. The next basket was made by Henry Pogue, on the white team, and the excitement of the crowd grew more and more.

The half-time performance from the Sociedad De Latinos group resulted in the whole crowd joining in and dancing to the music. At the end of the second half, the game finishes with a 8-6 score, with excitement on everyone’s faces as they all came together as one to help support the event.

The Best Buddies sponsors, Shari Snavely and Nella Sanders are proud of the turn out and overall success of the event. Sanders believes that “this was one of the most successful we’ve had.”

Snavely explains, “We also set a record as far as fundraising goes, so we were really proud of that. It’s great to see the community and the students all come out and check out what Best Buddies is about.”

Overall, the mission of Best Buddies International is dedicated “to establishing a global volunteer movement that creates opportunities for one- to-one friendships, integrated employment, leadership development, and inclusive living for individuals with intellectual and developmental disabilities (IDD).”

The Best Buddies Basketball game is an opportunity to involve the community in supporting this mission.