A behind-the-scenes look at the production of 'Godspell' 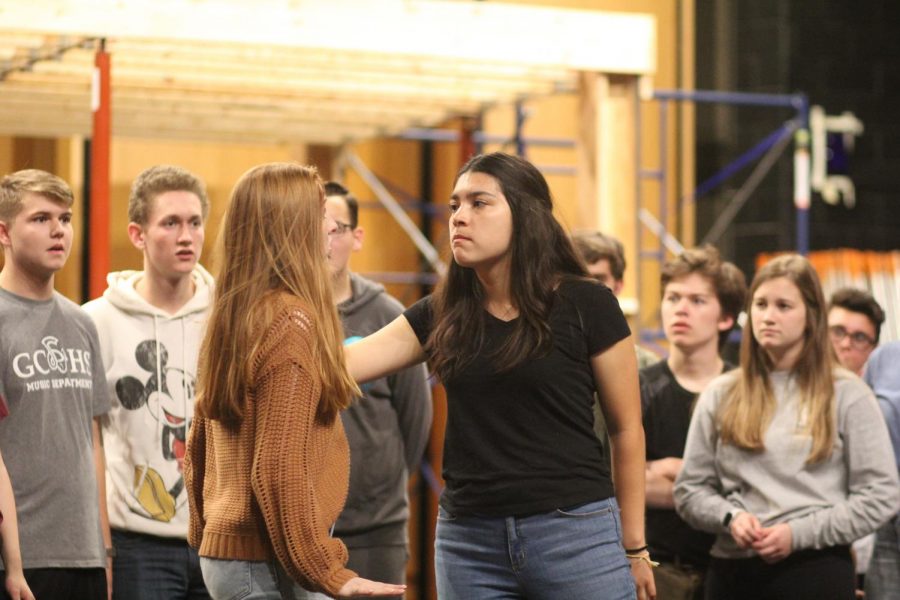 Junior Larina Pelletier gives an intense stare to sophomore Amanda Barry in a scene from ‘Godspell’.

A common tradition here at GCHS is the fall musical. Every fall, Encore!, the theatre company, works for months on a musical to be performed in late November. This year, Encore! will be performing a production of ’Godspell’, a renowned Broadway musical focused on the idea of coming together in the face of division, by way of a musical interpretation of the Gospel of Matthew.

The department at the helm of the entire production is Encore!, the theatre company at GCHS, that has been putting together productions every fall for many years now. The decision to choose ‘Godspell’ as this year’s musical came from the company’s director, Pat Kerr.

Kerr has been working with GCHS for over 18 years, coming back this year to produce ‘Godspell’.

Kerr is filling in for theatre and English teacher Maureen Ritter, who has produced past musicals such as ‘Les Miserables’ and ‘Footloose’.

“The first thing we have to start with is just looking at the match between the talent we have, and the vehicle, which is the musical,” Kerr said.

Kerr decided to choose this musical because it was the last musical he directed before he left GCHS, along with its timely themes.

“For me, the concept of the show is creating community.” Kerr said. “Our country seems to be so divided [right now]. We can’t even listen to each other, and [the theme of community] really comes out in the opening act of the show.”

The opening act focuses on a group of philosophers arguing over different philosophies, with seemingly no common ground being found.

In the end, Jesus appears, and “starts creating [a] community” where people can mutually agree on things and be respectful of other people’s beliefs.

The QR code to the right of this column can be used to purchase tickets. ‘Godspell’ will be showing November 22-24.

Another crucial part of the production is the band, as they are wholly responsible for the score and soundtrack of the musical. For ‘Godspell’, the score is based entirely off of a recently rescored rock-oriented version.

“There are two versions of the show… the original was written in the early 70s, [the version we are using] was written in 2012… One of the differences is the music is more rock-oriented.” said band director Dom Bertino. “We did the original maybe 18 years ago, before we had the theatre, and we did it down in the arena.” This is the same musical that the director of the musical, Patrick Kerr, referenced previously.

The musical requires a lot of coordination between the many respective departments. Tech and Encore! started rehearsing together in mid-October. Band and Encore! will start to rehearse together in mid-November. Currently, band rehearses in the choir room and consists of seven members: three electric guitars, one bass, two pianos, and a drum set.

“This year, we’re not [putting the band in the orchestra pit]. Because we’re a smaller group, and [because] it’s a rock band, we’re putting the [band] on stage, in the scenery.” Bertino said.

Senior Kevin Urban will be playing bass in the ‘Godspell’ band and has been playing an instrument for much of his life.

“I’ve done [band] since fifth grade and I’ve been involved with trumpet, and I eventually moved on to bass.” Urban said.

“I’m really used to jazz music, and kind of concert music, so transferring into rock, it’s a little bit different.”