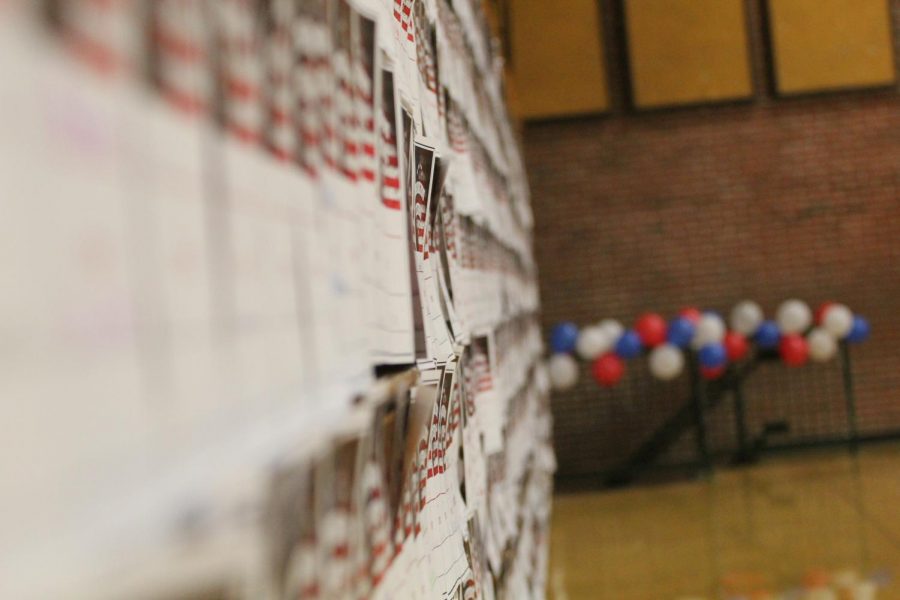 On Nov. 12, Grayslake Central celebrated its eighth annual Veteran’s Day celebration in the fieldhouse. According to junior PSP member Hannah Kolb, an estimated 150-200 veterans were served at the annual Veteran’s Day breakfast after the ceremony, which is a record. The event was put together with help from the Veteran’s Day planning committee, two PSP classes, and Key Club.

The festivities began with the national anthem, performances by the band and choir, and speeches from Principal Dan Landry and representative Brad Schneider of the 10th Congressional District.

The keynote speaker was Leon Walker, who served in the Navy and held positions as a Navy drill sergeant, rescruiter, and Navy Junior ROTC instructor. Walker’s awards include multiple Sailor of the Year citations, the Meritorious Service Medal, the Navy and Marine Corps Commendation Medal, and the Navy Achievement Medal.

In his speech, Walker was able to connect to students by encouraging them to embrace any failures they encounter. He related test taking, which all students face, with his own struggle to pass a test to get into the Navy. At the time, he said, it seemed like failure. Later on, however, he was able to contribute more than his peers who scored higher than him. “My minimum took me to my maximum,”said Walker, as the room was silent and all eyes were on him.

Principal Dan Landry received many compliments on the students’ respectful reverence. “[The students] are so extremely respectful. There are so many stigmas about millennials…but the respect that everyone has is absolutely amazing…it brings a tear to your eye,” said technology specialist Kristen Breault, who recently retired after 21 years in the Navy. Breault also keynoted the speech, prior to her job placement, in 2015.

Walker’s speech was met by a standing ovation that continued until all veterans exited the fieldhouse to the Veteran’s Day Breakfast.

This Veteran’s Day was especially relevant for Bien who discovered, after she signed up to be in the speech group, that she is a founding daughter.

“I’ve had an ancestor fight in every war since before the revolution… starting in 1636 in the Pequot Wars,” said Bien. “I found this binder that was like 800 pages long just full of all of our family history.” As well as discussing her family connection, Bien stressed the importance of veteran roles in American history.

“It’s really important to… reflect and think about…every single sacrifice every single veteran has made because in reality…our country…would not exist without veterans,” said Bien.

Junior PSP member, Hannah Kolb described getting “chills” when hearing each speech, but not only PSP students that en-joyed the speeches at the Breakfast.
“I love to hear the kids talk [at the breakfast],” said Navy veteran, Ted Rock. For Rock, this is his fourth time at Grayslake Central for Veteran’s Day.

“I enjoy the students. I love it when we walk through, and they clap. It makes me feel good…I’m proud of my military background. I’m proud of the other veterans who did something that’s good for everybody else that you take a slice out of your life to get…to get that recognition from youngsters is really special,” said Rock.

When people talk about the sacrifice that veterans give, it is often hard to imagine. For World War 2 veterans, this sacrifice was difficult because of limited access to quick, accessible communication.

It is not only being away from a partner that is challenging. Often times, veterans have to miss time with their children, even in the first moments of parenthood.

“The first cruise I went on as after I was married, I had a 10 month old son, and I missed nine months of his life…I think it’s good to talk about it to realize what a sacrifice it was,” said Rock. Talking about this sacrifice in detail helps civilians keep a connection with the hardship that veterans endure.

“You don’t really know unless you are told,” said Landry, “there are things going on in other people’s lives that affect them negatively.”

While Veteran’s Day is celebrated one day a year, veterans all over America make sacrifices every day. So, how can Grayslake Central students honor veteran this sacrifice everyday? First, start with a recognition of history.

“A World War Two vet may take a thank you, but if its a Vietnam vet, they may just want you to say ‘welcome home’ because they never got a welcome home,” said Breault. “If you notice most veterans that are homeless or have problems or stigmas, it’s the Vietnam veterans”.

Breault mentioned that education is key to help students bemore mindful about veteran sacrifices, so that students understand the meaning behind patriotic gestures like saying the pledge of allegiance every morning at school

“I asked a bunch of kids: ‘who wrote the Star Spangled Banner?’ and nobody knew,” said Breault.

Breault suggested doing a history trivia question of the week, like word of the week at Grayslake Central to promote an appreciation for American history. After all, like Bien says, America exists today because of the sacrifices of veterans.